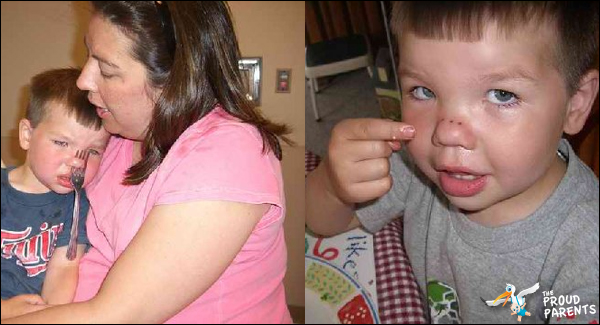 Posted yesterday, we found out the truth on Snopes.com. From his mother:

It’s real. Happened July 11th in Minneapolis at a chinese buffet restaurant. He was climbing into the booth and fell while holding his fork in his hand. When the waiter picked him up from under the table the fork was through his nose. There was only a little blood because the fork tines missed all of the cartilage in his nose (Thank God). The one picture is from the ER and the other picture is two days later at home. The ER doctor and ENT doctor we saw the following day said that they had never seen this before and that we were pretty lucky that the fork went up and out through his nose. We saved the fork and this picture for him to see when he gets older. We emailed the pics to our family, coworkers and friends and now they are all over the internet. Live and learn I guess.