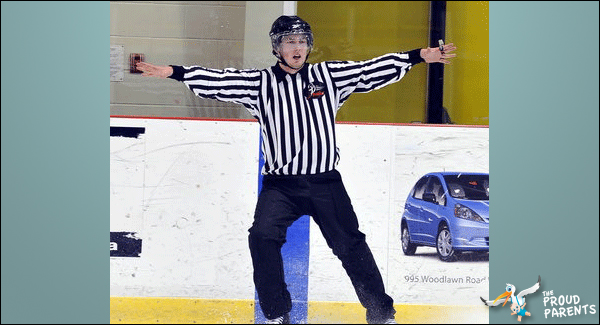 A coach, a mother and her son were all taught a lesson in manners on Friday night when they were ejected from a Peewee league hockey game, by a 13 year old referee. In case you’re wondering, Peewee is the league for 11 and 12 year olds and is no place for crazy hockey parents to start breeding dickhead high school bros. Hockey Canada has a zero-tolerance policy regarding verbal abuse of on-ice officials, which was implemented in Saint John last August. Police were even called to the scene to make sure the young officials weren’t harrassed while leaving the game. What does the Proud Mother have to say for herself?

Police in New Brunswick’s Kennebecasis Valley were called to a local rink Friday night after a 13-year-old referee ejected a hockey mom and a peewee coach.

During that game one of the team’s coaches was ejected along with a player and a hockey mom after witnesses say they verbally abused a 13-year-old referee for missing calls.

The game involved house league players who are 11 and 12 years old.

Hockey Canada has a zero-tolerance policy regarding verbal abuse of on-ice officials, which was implemented in Saint John last August.

That rule allows referees – even 13 year olds – to eject coaches, and to stop the game until abusive spectators leave the stands.

Tempers got so hot Friday that police were called to the Qplex arena in case anyone tried to confront the young officials outside the arena.

When approached on Sunday after another peewee game, one of the coaches made it clear he had nothing to say about the matter.

The mother, who was ejected, said only the incident is now over and she has no regrets about her part in it.