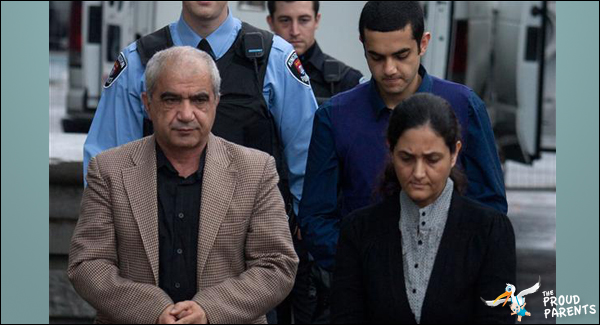 Well here’s one for the books, Mohammad Shafia, pictured left, his son Hamed (back right) and his wife Tooba Mohammad Yahya (front right) are seen here walking to court to be charged with first degree murder in the deaths of their daughters Zainab (age 19), Sahar (age 17), and Geeti (age 13), as well as that of their Aunt Rona Amir Mohammad (age 50). These idiots were so dumb they actually Google searched the phrase “where to commit a murder”. Make the jump for the full news story..

KINGSTON, Ont. — In the days after Mohammad Shafia’s three daughters died, he spoke privately to family about how they had dishonoured him by consorting with boys, jurors at his murder trial were told Thursday.

“God’s curse on them . . . may the devil s*** on their graves,” Shafia said, in a conversation with his second wife, Tooba, and son, Hamed, that was secretly recorded by police. “Is that what a daughter should be? Would (a daughter) be such a whore?”

Prosecutor Laurie Lacelle revealed the excerpt from a wiretap during an hour and a half opening address to the six-man, six-woman jury. The cavernous room of Kingston’s 153-year-old limestone courthouse was full with dozens of journalists and roughly 100 spectators, as Canada’s first ever mass honour killing case began to unspool in public for the first time.

Jurors were told that they will hear evidence about the ancient cultural practice of honour killing, in which the chastity and obedience of female family members is paramount. In some cases, families believe the only way to cleanse shame and restore honour is to kill offending women.

Lacelle told the jurors that police planted a listening device in a Shafia vehicle on July 18 and recorded several conversations in which Shafia complained to his wife and son that his daughters had turned bad. They wore revealing clothes and makeup. Zainab ran way from home in May of 2009 and demanded permission to marry her Pakistani boyfriend. The two other daughters wanted to leave home to get way from an oppressive and abusive environment.

“He said, even if they hoist me up onto the gallows, nothing is more dear to me than my honour,” Lacelle said, recounting Shafia’s words. “Let’s leave our destiny to god and may god never make me, you or your mother honourless.”

Lacelle revealed that police seized a laptop computer from the family’s home in Montreal. It was registered to Shafia but used by his son Hamed. Forensic experts found evidence of a Google search 10 days before the deaths.

“The words entered were: ‘Where to commit a murder,’ ” Lacelle said. A few weeks earlier there had been a search on the computer for, “Can a prisoner have control over their real estate,” the prosecutor said.

Lacelle said that autopsies on the victims showed that they drowned, though experts could not determine when they drowned. Toxicology tests did not find any evidence of any incapacitating substances in the bodies of the victims. Three of the victims had fresh bruises on the crowns of their heads. Lacelle offered no explanation for the injuries.

Only one witness appeared Thursday, Kingston police Const. Julia Moore, an identification officer who collected evidence and took photos at the scene. Moore explained that the car in which the victims were found, a Nissan Sentra, was in first gear, with the driver’s side window down, the headlights switched off. The two front seats were reclined.

Lacelle said the jurors will hear evidence that Tooba and Hamed have both acknowledged in statements that they were at the locks when the Sentra went into the water. In public statements the family made in the days after the deaths, they said that their daughter, Zainab, had taken the car without permission on that night and they did not know how the four ended up dead in the canal.

The family had stopped in Kingston early on the morning of June 30 on the way home to Montreal from a family trip to Niagara Falls. They took two rooms at a motel near the locks.

Defence lawyers did not make any opening statements to the jury and they have not yet cross-examined Moore. She will be back on the stand Friday.