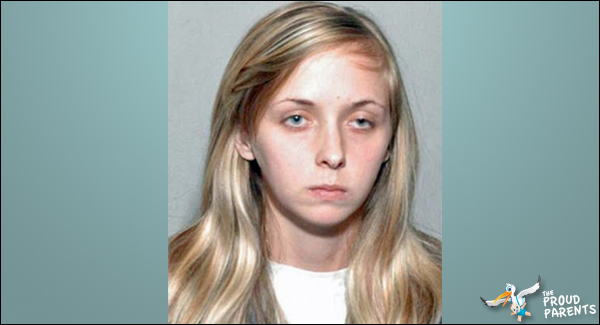 Meet Alexandra Tobias, the 22 year old mother who murdered her daughter for interrupting her game of Farmville. No, we’re not kidding, that is the actual reason this Proud Mother shook her baby to death. Thankfully for us, she met a judge that hated her as much as we do and she got one hell of a sentence! Keep reading for the full news story!

Courtesy of Jacksonville.com
By David Hunt

One day before she murdered her infant son with her bare hands in her Jacksonville home, Alexandra Tobias took a personality test on the Internet that cast a grim outlook in a sophomoric tone.

The quiz results, posted to her Facebook page, labeled her as bipolar with a passage that read: “Way to go, you crazy person. You are too much for any one person to handle, including yourself.”

The next morning, 3-month-old Dylan Lee Edmondson was dying of head injuries as investigators, doctors, Duval County jail inmates and even family began spotting a pattern of lies to cover up an ugly truth.

Tobias, 22, a Wolfson High School graduate who wanted to go to college and had a generally good reputation as a parent, had shaken the baby to death while playing interactive games on her Facebook page.

Circuit Judge Adrian G. Soud sentenced Tobias to 50 years in prison after hearing several hours of testimony Tuesday. Tobias cried at points, but was led to a fingerprinting station with a blank look on her face after Soud gave a scathing lecture from the bench.

“He who is the most defenseless among us was murdered by his own mommy. And why? Because he was crying during a game of FishVille or FarmVille or whatever was going on during Facebooking time that day,” the judge said.

The sentence was the highest end of a plea bargain negotiated in October as Tobias pleaded guilty to second-degree murder in Dylan’s death.

Her plea went viral as popular websites like Gawker and The Daily Beast picked up the story and CNN’s “Nancy Grace” show picked apart the case for nearly an hour.

To the baby’s father, E.J. Edmondson, that was one of the most disheartening parts of the ordeal.

“That is insulting. It wasn’t about Facebook. It was about my son,” he said outside the courtroom.

More disheartening, Edmondson said he did not know until he listened to forensic testimony Tuesday that his son was in pain for the final hours of his life.

Tobias told the judge she was suffering from postpartum depression, but wants to go back to the good person she was before the killing.

Tobias’ friends and family described her as a fun-loving, albeit somewhat mischievous, child who grew into a respectable woman.

Life dealt her some tough knocks. She’d found her mother dead in 2008. She told a psychologist she’d been raped at a younger age.

Her plans to go to college were set back when she got pregnant. She and Edmondson were in an on-again, off-again relationship that became so intense both of them were arrested for domestic violence several weeks before the baby’s death.

Still, nobody close to Tobias could believe she would take her frustrations out on the baby.

Before Tuesday’s hearing, the Times-Union obtained case depositions and letters in Tobias’ handwriting that show how the young mother tried to socialize herself in jail as if she’d be just a temporary occupant. There was a point when she thought she’d beat the charges.

“She laughs and she colors. I mean, she’s got her coloring pencils and they sit around and they just – you know, it’s like they’re in a home for girls, you know. It’s fun time, and it’s not,” said Lois Hay, a fellow inmate who was deposed in the case by Assistant State Attorney Rich Mantei last March.

Hay said at one point Tobias told inmates she shook the baby and smashed his head off her computer monitor. But she also would change the story to blame the abuse on her boyfriend, his mother and her dog.

She later told a psychologist she blacked out to try to cover up her confession to police, but she was snared as prosecutors were given a recorded phone call she made from the jail calling it a lie.

“I had a son named Dylan Lee but he passed away on January 20, 2010!” reads a letter Tobias wrote to a male inmate she was trying to court romantically. Prosecutors intercepted it. “They are trying to charge me with my son’s death and child abuse. Now I don’t expect you to understand but I can’t really talk about it but I can tell you I’m in here for the wrong reasons.”

She wasn’t the only one in disbelief.

“She was a young mother. She was under a lot of stress, but I don’t see her doing anything malicious. She knows better,” Tobias’ sister, Elizabeth, told Mantei in a deposition last February.

Prosecutors said Tobias called the baby’s father before she called 911 to report her son had stopped breathing. She’s hysterical in the recording as she tries to collect herself to follow the dispatcher’s instructions on mouth-to-mouth and chest compressions as the rescue squad is en route.

Defense lawyer Jan Abel asked Soud to review the 911 recording before he sentenced Tobias. He did, but Tobias’ crying during the call did not change the judge’s mind.

“It was to you he [Dylan] would turn to for food. It was you he’d turn to for comfort, for love, for help when he was sick,” Soud told Tobias. “When he turned to you and cried, you murdered him.”

A month before she killed her son, detectives said Tobias joined a Facebook advocacy group against baby-shaking.

Prosecutors zeroed in on the Facebook page when they realized it was the likely background of the baby’s death. Screen captures that have become part of the case file show Tobias used the social networking site often.

She labeled herself a Christian and a Republican and gave no specific reasons for being a fan of things like television’s “One Tree Hill” and Hollywood starlet Megan Fox.

Tobias kept a profile for Dylan as well. New Year’s Day postings showed he was 12 pounds and 22 inches tall.

Psychologist Stephen Bloomfield testified Tuesday that Tobias took Xanax, without a prescription, the morning of the baby’s death. He explained that the anti-anxiety drug can exaggerate downward mood swings for depressives.

Bloomfield said much of Tobias’ depression is rooted in her upbringing under a mother who was diagnosed as bipolar and who grappled with drug problems.