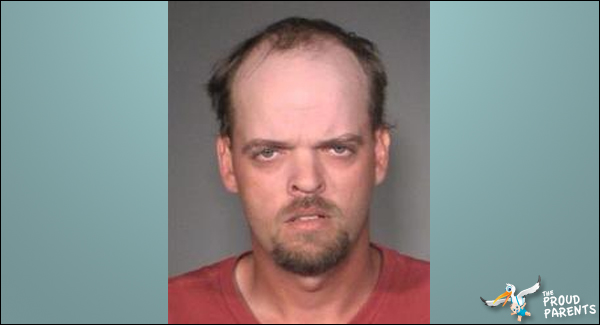 This crazy looking guy is Mark James Nelson, and he is exactly that. This disgrace of a human being squeezed his girlfriend’s 6 week old infant child until he heard cracks. Rather than taking the child to the hospital, he acted as if nothing happened. Somehow the mother didn’t notice anything wrong with her child, who was now suffering from internal bleeding with 22 cracked ribs. It wasn’t until the next morning when she picked the child up and it felt “crunchy” that she started to become concerned. Keep reading for the full disgusting news story..

ST. PAUL, Minn. – The Washington County Attorney’s Office is charging a South St. Paul man with first-degree assault on a 6-week-old infant in connection with an incident on Aug. 19 that sent the babe to the Hennepin County Medical Center with more than 30 bone fractures.

According to the criminal complaint, 32-year-old Mark James Nelson squeezed the infant’s torso until he heard cracking noises after he became angry with the child’s mother.

Medical personnel at HCMC found that 22 of the child’s 24 ribs were broken and 37 separate fractures were counted, as well as bruising to the liver and lungs and eye trauma.

The child was originally taken to Fairview Lakes Medical Center in Wyoming, Minn., where he was seen for respiratory failure. Initially, doctors believed the boy may have had pneumonia until a chest x-ray revealed the fractured ribs.

Doctors also found the baby had lost a significant amount of blood through internal bleeding and the nearly 10-pound boy required a blood transfusion.

The doctor who reported the suspected abuse to police and a social worker met with the boy’s mother, who said her son looked different when he woke up on Aug. 21, being less smiley and more irritable than usual. She also said that her boyfriend had been staying with her at her Forest Lake apartment since Aug. 18 and had helped her care for the child.

According to the boy’s mother, she became concerned for her son when she picked him up and “he felt crunchy” and had redness in his eyes; however, she said Nelson urged her not to take the boy in to a doctor because his appetite was normal and “he would get better.”

When police interviewed Nelson, he admitted he squeezed the boy until he heard something crack after arguing with the child’s mother about a planned camping trip.

“The fighting between me and [the boy’s mother] came back to me and I got upset again,” Nelson was quoted as saying in the criminal complaint. “That’s when I squeezed [the boy] by mistake. I shouldn’t have done it.”

Nelson told investigators he squeezed the child for two seconds and stopped because he heard something crack, describing the sound as similar to a cracking wrist. He also said he did not tell the child’s mother what he had done.

The criminal complaint states that the child stopped breathing twice on Aug. 21, and Nelson got the boy to breathe again by plugging the child’s nose and breathing air into his mouth twice, but he still did not want to call an ambulance.

Nelson told police he was not afraid and only planned to call 911 if he could not get the boy to breathe again, but he did not tell anyone about what happened because he did not want anyone to know.