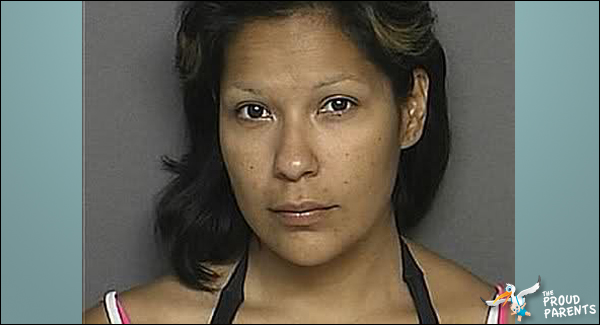 This is Christina Muniz, the Arizona mother that decided she was going to pack up and head to California to fulfill her dreams of becoming a stripper, without her kids. She got busted because one of her sons (just 11 years old) called the police and told them what was going on. You’d think that’s where the child abuse ended, but when CPS came to take the kids away and the 11 year old tried to hug his mother goodbye, she punched him in the stomach. I’m not kidding, she legit punched her child in front of a police officer. But what can you expect from a woman who’s dream is to become a stripper? Keep going for the full, crazy story!

An Arizona mom was arrested as she packed up for a future as a California stripper because she intended to leave her two young children behind, police said today.

And when her 11-year-old son tried to hug her before their separation, she made a fist and punched him in the stomach, according to police reports.

That’s when the cops arrested her.

Police in Surprise, Ariz., were called to the house by Christina Muniz’s 11-year-old son at 9 a.m. on June 11. He said his mother was leaving him behind along with his 6-year-old brother.

“The boy stated his mom is in the house packing with her boyfriend, and that she is going to California without them,” Sgt. Mark Ortega, of the Surprise police department told ABC News.

“When he (the child) told her not to go, she said she was going to beat him. This is the call coming in from the child,” Ortega said.

Police said the woman, 29, was abandoning her two boys because she said she was sick of them, and wanted to finally be able to pursue her dream of becoming a stripper.

When police arrived they were met by the 11-year-old, and they said that Muniz came out of their apartment allegedly laughing at her son, exclaiming she couldn’t believe he called the police on her.

“She said she was tired of having the kids, she needed a break and didn’t want them. She told the officer on the scene, Officer Robert Burtrum, ‘Do what you need to do to get them out of here,'” Ortega said.

Muniz allegedly told the officer she needed to go out and play without them, he wrote in his report.

The officer took the 11-year-old a short distance away from Muniz to speak to him in private and the full scale of the alleged emotional abuse he and his brother were dealing with became clear, Ortega said.

“Burtrum asked Muniz if he could speak to the boys alone, and she told him it was fine and to take them when he was done,” Ortega said.

“The boy told the officer that she was always telling him things like that, that she didn’t want him, that he was ugly, that he had buckteeth and that she just wanted him to leave,” Ortega said.

According to Ortega, when Burtrum asked the boy if he believed his mother would leave him like that, the boy told him yes.

“He said all she cares about is her boyfriend and drinking wine,” Ortega said.

Ortega said after Burtrum spoke to the boy in private, he found Muniz sitting at her dining room table drinking what he believed to be wine.

“She said it was the only way to cope with the kids,” Ortega said.

The boy led the officer to his room, where Burtrum described in his report as finding the boy’s bed covered in two feet of laundry. The 11-year-old allegedly told Burtrum he had no where to put the clothing and either slept on the floor or upstairs in his mother’s room. When Burtrum went to inspect Muniz’s room, he said he found a pipe with marijuana residue in it, the police report stated.

When they returned downstairs, Burtrum said in his report he found Muniz asleep on her couch.

“The 11-year-old tried to wake her, and she yelled ‘what the f do you want, I never want to see you again,'” Ortega said.

Child protective services arrived at the house and the 11-year-old told them he and his brother wanted to go stay with their father in Phoenix. The CPS presented Muniz with a temporary custody notice placing the children with the father, which she agreed to, Ortega said.

“When she saw the temporary custody notice, she looked at the 11-year-old and told him she never wanted to see him again, to never call her and that she would hopefully be in California,” Ortega said. Despite that, as the CPS started to take the children away, the 11-year-old tried to hug his mother goodbye.

“Christina made a fist with her right hand and she punched him in the stomach,” Ortega said.

At that point police arrested her and charged her with possesing drug paraphernalia, disorderly conduct, and child neglect.

“She never showed any concern for the boys or remorse,” Ortega said Burtrum wrote in his report.

“During her processing she said she smoked marijuana all the time, and that she was happy. She said she thought her boyfriend would now get a place with her and she could finally pursue her lifelong dream of being a stripper and making a lot of money,” Ortega said.

“This is absolutely the worst I’ve ever heard of. We’ve removed a lot of children from parents, we have to sometimes,” Ortega said.

“To see somebody so readily wanting to be so abusive, and to the very end the boy was looking for affection. To think he’s endured this for his whole life, I hope he gets some normality somewhere,” Ortega said.

Muniz appeared in court Monday, and according to police told the judge it was “all a big misunderstanding,” and she denied she ever punched her son. She is being held on $20,000 bond and could not be reached for comment.