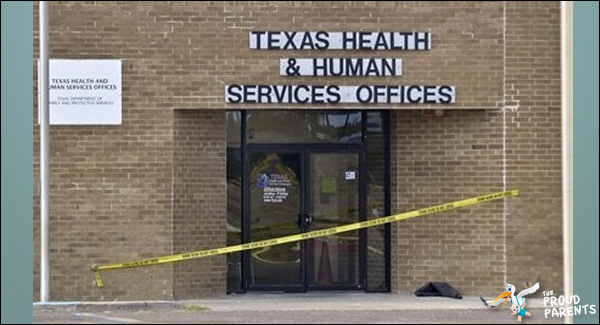 Above is the scene where 38 year old Rachelle Grimmer attempted to murder her children before killing herself – upset about not being eligible for food stamps, Rachelle brought her two children in to the office and demanded a new case worker. Shortly after entering a private room she pulled out her gun and took hostages. After a lengthy stand off Rachelle let the employee go, not long after three shots rang out from the building. Rachelle shot her young children, a 10 year old boy and a 12 year old girl who are now in very critical condition.

SAN ANTONIO — A Texas woman who for months was unable to qualify for food stamps pulled a gun in a state welfare office and staged a seven-hour standoff with police that ended with her shooting her two children before killing herself, officials said Tuesday.

The children, a 10-year-old boy and a 12-year-old girl, remained in critical condition Tuesday. The shooting took place at a Texas Department of Health and Human Services building in Laredo, where police said about 25 people were inside at the time.

Grimmer first applied for food stamps in July but was denied because she didn’t turn in enough information, Texas Department of Health and Human Services spokeswoman Stephanie Goodman said.

Goodman didn’t know what Grimmer specifically failed to provide. In addition to completing an 18-page application, families seeking state benefits also must provide documents proving their information, such as proof of employment and residency.

“We were still waiting, and if we had that, I don’t know if she would still qualify or not,” Goodman said.

Goodman said Grimmer’s last contact with the agency appeared to be a phone call in mid-November. When the family entered the Laredo office on Monday shortly before 5 p.m., Goodman said Grimmer asked to speak to a new caseworker, and not the one whom she worked with previously.

Shortly thereafter, Goodman said, Grimmer was taken to a private room to discuss her case. She said it was there the mother revealed a gun and the standoff began.

Police negotiators stayed on the phone with Grimmer throughout the evening, but she kept hanging up, Baeza said. She allegedly told negotiators about a litany of complaints against state and federal government agencies.

Despite those complaints, Baeza said it wasn’t clear what specifically triggered the standoff.

“This wasn’t like a knee-jerk reaction,” said Baeza, adding that Grimmer felt she was owed restitution of some sort.

Grimmer let a supervisor go unharmed around 7:45, but stayed inside the office with her children. After hanging up the phone around 11:45, police heard three shots, and a SWAT team entered the building. Inside, they found Grimmer’s body and her two wounded children.

The children were “very critical” and unconscious when taken from the scene, Baeza said.

Multiple family members in Ohio and Missouri did not immediately return phone messages Tuesday. The Ohio Department of Job and Family Services said the agency had no information on Grimmer.

A YouTube channel the family appeared to have created in 2009 includes a profile that reads, “We are Shell, Ramie and Tim. Mom, daughter 10 and son 8. We like turtles, horses, and being outside. The kids have two turtles, an alligator snapper and a red eared slider. We work on naturalizing them and try to give them the most natural setting possible.”

There are no videos uploaded. Tagged as favorites are an eclectic mix of nearly two dozen videos, ranging from a solar panel installation to a live clip of the band of AC/DC. The “Hometown” category reads: “We don’t have one.”

Goodman credited an office supervisor, a 24-year veteran of the agency, for ensuring the release of the other employees.

“He had told her he would try to help her, and that if she would let everyone else leave, he would talk to her,” Goodman said.

Goodman didn’t know whether Grimmer had a job, or whether her children were covered under Medicaid or the state children’s health insurance program. The family had no history with the Texas Department of Child Protective Services.

The family’s move from Ohio may have complicated Grimmer’s application if the family had no Texas records the agency could check electronically, Goodman said. Grimmer also would have been denied benefits if she was receiving welfare assistance.

Grimmer also appeared to fall out of touch during her pursuit of food stamps. The mother originally applied July 7, but Goodman said Grimmer missed her first interview and didn’t call back and reschedule for a few weeks. Her case was closed Aug. 8 for lack of a full application, Goodman said.

How much food stamp money a family receives depends on their income level. The average family on food stamps in Texas receives $294 a month.

Three months later, Grimmer called the agency’s ombudsman Nov. 16 and requested a review of how her rejected case was handled. Goodman said the agency found that caseworkers acted appropriately after looking over Grimmer’s file, and a supervisor called Grimmer’s cell phone last Thursday to tell her the outcome. No one answered and the phone’s voicemail box was full, Goodman said.

“The indications she had she was dealing with a lot of issues,” Goodman said.

State welfare offices have come under scrutiny in the past for being overburdened, but Goodman said the agency has made significant strides in the past three years. She said wait times are shorter, and that Grimmer was scheduled for her initial interview just one day after applying. Grimmer didn’t make the appointment, she said.

Goodman said it’s not unusual for caseworkers to confront angry or confused benefit-seekers, but that it’s very rare for a situation to escalate to violence.