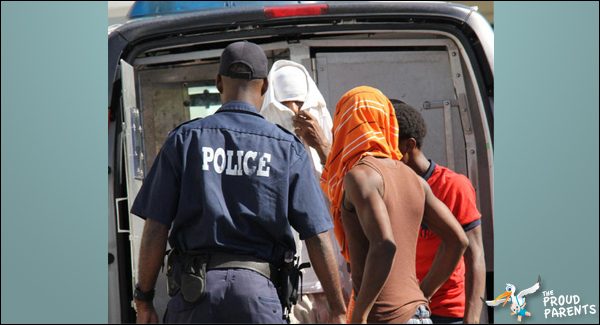 Alphonso Warren, with a white shirt covering his face, is taken from police custody into a Kingston, Jamaica, courtroom for his first appearance Tuesday.

KINGSTON, JAMAICA — The Canadian woman and Jamaican man alleged to have hidden the partially decomposed body of their 2-year-old son in a suitcase in their home here will undergo a psychiatric evaluation before they attempt to seek bail.

Stephanie Warren, 34, and Alphonso Warren, 32, are the same couple who admitted to abandoning their 8-month-old daughter in a frigid Toronto stairwell four years ago. That girl, who became known to Torontonians as “Baby Angelica” for her cherubic features, was discovered in a parking garage at Finch Ave. and Leslie St. on Jan. 30, 2008, face down and bleeding from the nose.

The couple made their first appearance in a Kingston court Tuesday.

Their lawyer, Chris Tavares-Finson, ordered the psychiatric assessment himself, saying outside court he felt it was necessary before he could enter a plea or request bail.

“It was a rather unfortunate set of circumstances,” Tavares-Finson said, referring to the gruesome allegations against his clients. “So we really have to assess the mental state of the individuals involved.” He refused to comment on the Warrens’ mental state or demeanour while in custody.

When the couple met in court Tuesday, Alphonso, wearing a short-sleeve white shirt and khakis, grinned and winked at Stephanie, who wore a brown top and black-and-white floor-length skirt.

The couple did not enter a plea or address the crowded first-appearance court. The matter was held over until Feb. 21.

In a brief description of the case, the prosecutor referred vaguely, but with emphasis, to the couple’s past troubles in Toronto.

“We have been contacted by another jurisdiction,” he said, “in relation to another child.”

The more recent allegations against the couple emerged Jan. 15, after a neighbourhood mob stormed their Clifton Rd. residence located in the impoverished inner-city of Jamaica’s capital. They eventually found the child’s partially decomposed and apparently mummified corpse stuffed in a suitcase. The community had grown suspicious when the child had not been seen or heard from in more than two months.

Pathologist reports on the cause of death have so far been inconclusive, except to rule out foul play. The couple was charged Sunday with concealing a death. It is unclear what penalty they could face if convicted.

Kingston police Supt. Delroy Hewitt said the couple could still be charged in relation to the actual death of the child.

“We are still waiting on some additional scientific evidence,” he said. “They could be charged further, yet.”

Several years ago, back in Canada, Baby Angelica, along with three other children under the age of 6, were removed from the Warrens’ custody and adopted. Alphonso served half of a 22-month sentence for abandoning his daughter and failing to provide the necessities of life to their three other young children. Stephanie was fined $300 under the Ontario Child and Family Services Act.