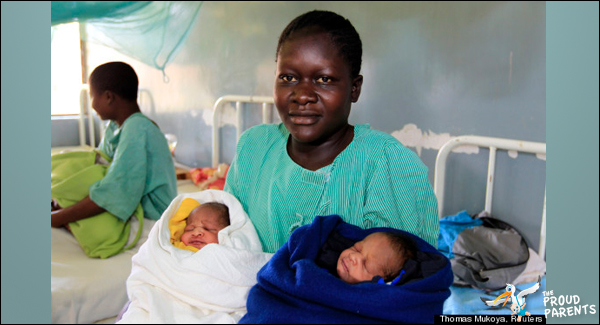 With the news of President Obama’s win over Mitt Romney, many children born around the world have been named after him. Only one has a brother named Mitt Romney. Millicent Owuor of Kenya, pictured above with the two aforementioned children, gave birth the day after the President laid claim over his second and final term and found a way to honour the victory. Although we think it might have been smarter to name one Barack and the other Obama, we’re not here to judge.. we just wouldn’t want to be named Mitt Romney. What are your thoughts? Check out the story below and let us know in the comments..

A Kenyan mother has named her new-born twins after US President Barack Obama and his Republican challenger Mitt Romney.

Millicent Owuor, 20, gave birth to the twins in south-west Kenya on the day Mr Obama was re-elected.

A short distance from the hospital, at the Obama family’s ancestral village, people were celebrating his victory.

“I named the first twin Barack and the second one Mitt,” Ms Owuor is quoted by Reuters news agency as saying.

Ms Owuor posed for photographers on Wednesday at the Siaya District Hospital with her twin boys.

She said she had named her twins after the winning and losing US presidential candidates in order to remember the day of the vote, Kenya’s Standard newspaper reports.

The US president’s father was born in Kenya and his step-grandmother, Sarah Obama, still lives in the village of Kogelo.

The residents of Kogelo sang and danced after Mr Obama was declared the winner.

“The reason why he has won is because God has given it to him,” said Sarah Obama, who turns 90 this year.