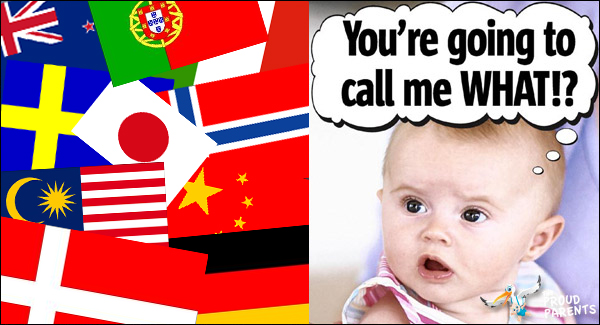 1) Talula Does The Hula From Hawaii (New Zealand)
New Zealand law bans names which could cause offence to a ‘reasonable’ person. Good thing too – the country is a stupid name hotspot. We found a couple from the islands who tried and failed to call their son ‘4Real’, but nothing beats the ridiculous moniker above. It belonged to a 9-year-old girl before a judge had her renamed during a custody battle. ‘It makes a fool of the child,’ he said. It certainly made application forms a pain in the butt.

Has New Zealand banned any other names? Oh yes. The judge listed some that were also blocked: Fish and Chips (twins), Yeah Detroit, Keenan Got Lucy and Sex Fruit. Number 16 Bus Shelter and Violence were allowed. Make the jump for the rest of these strange names..

2) Venerdi AKA ‘Friday’ (Italy)
Maybe this is what the Pope was talking about. Back in 2008 a court banned an Italian couple from calling their child Venerdi (translation: Friday). The judges reckoned the name – taken from ‘Robinson Crusoe’ – would expose the boy to ‘mockery’ and was associated with ‘subservience and insecurity’. The parents, however, might have the last laugh; they threatened to call their next child Mercoledi (Wednesday).

Has Italy banned any other names? Italian courts can step in ‘when the child’s name is likely to limit social interaction and create insecurity’. In Turin, Andrea was rejected (and changed to Emma) as it’s a boy’s name in Italy. Dalmata has also been rejected, as it means Dalmatian.

3) Brfxxccxxmnpcccclllmmnprxvclmnckssqlbb11116 (Sweden)
No, we didn’t fall asleep on the keyboard. That is an actual name a Swedish couple tried to inflict on their son back in 1996. Apparently the name is pronounced ‘Albin’ (we’re not sure how), and the parents chose it as a protest against Sweden’s admittedly strict naming laws. Tax authorities must give their blessing to both first and surnames before they can be used.

Has Sweden banned any other names? Oh yes. Some favourites include Metallica, IKEA, Veranda and Q. Google was OK though.

4) Gesher AKA ‘Bridge’ (Norway)
Back in 1998 those nasty Norwegians threw a woman in jail (admittedly for only two days) when she failed to pay a fine for giving her son an ‘unapproved’ name. Eccentric Kristi Larsen said she was instructed in a dream to name her son Gesher (Hebrew for ‘Bridge’), but the court were having none of it. Kristi did have 13 children already though, so maybe she had just run out of ideas.

Has Norway banned any other names? Undoubtedly, though in recent times they have replaced their list of officially sanctioned names with a general ban on monikers featuring swearing, sex and illnesses.

5) Chow Tow AKA ‘Smelly Head’ (Malaysia)
Unlike many countries which are gradually relaxing name laws, Malaysian authorities have cracked down on unsuitable titles in recent years. In 2006 government killjoys published a list of undesirable names that weren’t in keeping with the religious traditions of the country – such as Cantonese moniker Chow Tow – which means ‘Smelly Head’.

6) @ (China)
With more than a billion fellow countrymen, finding a unique name in China is difficult. Perhaps that’s why one couple called their baby the ‘@’ symbol – in Chinese characters it apparently looks a bit like ‘love him’. Bless. Unsurprisingly, however, the authorities were less sentimental and publicised the moniker as an example of citizens bringing bizarre names into the Chinese language.

Has China banned any other names? The police have control over all names given to children because they issue identity cards, but details of rejections are not widely circulated.

7) Miatt (Germany)
Country living up to stereotype alert! Surprise, surprise the Germans are somewhat officious when it comes to baby naming laws. Regulation-loving Deutschland has an entire department (the Standesamt) which decides if names are suitable. Miatt was rejected because it didn’t clearly show whether the child was a boy or a girl, but sometimes the decisions are somewhat arbitrary…

Has Germany banned any other names? The likes of Stompie, Woodstock and Grammophon were turned down, whereas the similarly strange Speedy, Lafayette and Jazz were allowed.

8) Anus (Denmark)
What is it about Scandinavian countries and name laws? The Danes are even tougher than the Swedes in this regard, with parents given 7,000-odd names to choose from by the government. Special permission is needed to deviate from the list, with ethnic names, odd spellings and even compound surnames forbidden. Luckily for him (we assume it’s a ‘he’), Anus was one of 250-odd names rejected each year.

Has Denmark banned any other names? Well, Pluto and Monkey had lucky escapes…

9) Ovnis (Portugal)
Before naming your child in Portugal, best consult the mammoth, 80-page government doc (and have it translated to English) that tells you which names you can and can’t use. It’s pretty strict (and random) – Tomás is OK but Tom isn’t – and celebs can forget about the likes of Apple and Brooklyn, which aren’t even on the banned list. Essex girls rejoice, however – Mercedes is allowed!

Has Portugal banned any other names? There are more than 2,000 names on the reject list, including Ovnis – Portuguese for UFO.

10) Akuma AKA Devil (Japan)
Here’s a name the Pope definitely wouldn’t approve of. In 1993 a Japanese parent called his son Akuma (which literally means Devil). The authorities decided this was an abuse of the parent’s rights to decide a child’s name and a lengthy court battle ensued. Eventually the father backed down and junior got a new, less demonic name.

Has Japan banned any other names? Lots. Names must use one of the 2,232 ‘name kanji’ characters decided by the government.

39 Comments Baby Names  //  In The News  //  You're Going To Call Me What!?
Prev.
Next
Random Funny Message
Sidebar A
Facebook
Sidebar B
RevContent
Sidebar C
Three Ring Focus