“I’m Pregnant With My Dad’s Baby” 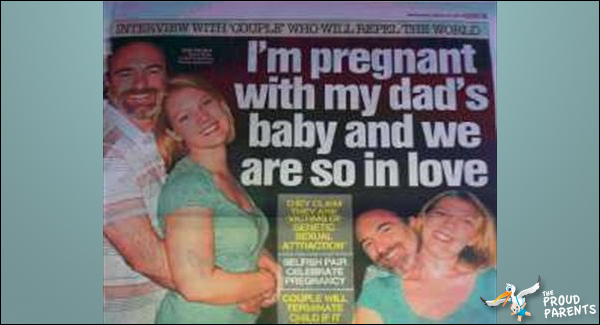 Do a google search for “Penny Lawrence” or “Garry Ryan” and you’ll turn up the story of a 28 year old who went searching for a father she’d never met after her mother and grandparents had passed away. Upon meeting, the two felt a sexual attraction to each other and persued that relationship. Attributing their feelings to a syndrom called “Genetic Sexual Attraction” – seen in family members who meet for the first time as adults and have a not so platonic love for each other. Now, Penny’s pregnant and fear they may be torn apart by the law. Is this disgusting, or do you support their relationship? Check out the entire story after the jump and vote in our poll below!
[poll id=”12″]

Scroll down for the full news story..

A 28-year-old woman who tracked down her long-lost father last year has revealed that she is pregnant with his baby.

Penny Lawrence went in search of her father Gerry Ryan following the death of her mother and grandparents. The Irish Sun reports that she eventually found Dublin-born Ryan in Houston, Texas.

After meeting, the pair embarked on a sexual relationship which resulted in Lawrence becoming pregnant. However, they have insisted that their attraction is the result of Genetic Sexual Attraction, a term previously created by Barbara Gonyo to describe the feelings between parents and their children – as well as siblings – who meet as adults.

“We are not committing incest, but are victims of GSA,” Lawrence told the paper. “We’ve never experienced a father-daughter relationship, so we’re just like any other strangers who meet in adulthood.”

Ryan expressed fears that laws could see the couple separated, but added: “It’s no different than if I met Penny in a bar. I’d have fallen for her as I have now. It doesn’t feel [like] we are doing anything wrong.”

The pair said that if the three-month scan of their baby shows no birth defects, they will remain together and raise the child.

Discussing GSA, Lawrence explained: “I did some research into it. I was stunned that some brothers and sisters, daughters and dads and mothers and sons were actually living happily as man and wife.”

However, her father pointed out: “GSA isn’t recognised in court.”