Parents Force Girl To Hold Sign As Punishment For Being Disrespectful 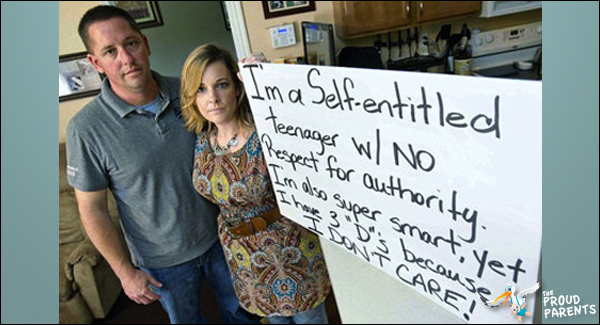 Gentry and Renee Nickell of Crestview, Florida, pictured above, are the proud parents that forced their teenage daughter to hold the sign featured above on the corner of a busy intersection in their hometown. This punishment came after repeated attempts to correct her behaviour using conventional methods – with no positive results, and her grades declining, the Nickell’s decided to get creative with their parenting.

Worried about their 13-year-old daughter’s increasingly disrespectful behavior, Gentry and Renee Nickell of Crestview, Florida, decided to make her punishment humiliating and public. On Saturday, the teen (whose name has not been released) spent 90 minutes standing at a busy intersection with a hand-written sign describing her sins.

It read: “I’m a self-entitled teenager w/no respect for authority. I’m also super smart, yet I have 3 ‘D’s’ because I DON’T CARE.”

Passing motorists saw the teen, who was standing with her dad at the corner of Ferdon Boulevard and U.S. Highway 90 in Crestview, and snapped pictures of her with their cell phones. Some of the photos ended up on Facebook, where they were shared within the Crestview community (the Nickells said that they have not seen those photos; Yahoo! Shine was not able to find them online). Someone called the police, who showed up to talk to the teen and left after deciding that she was “aware of her punishment and she was not in any harm,” Crestview police records show.

Now, however, the parents are feeling a little public humiliation of their own.

“I wasn’t even thinking about what the public was going to think,” her mom, Renee Nickell told the Northwest Florida Daily News. “I was thinking about our daughter. It was for her to be in the public and recognize what she had done wrong.”

“We spend so much focus on not wanting to hurt a child’s self esteem that we don’t do anything,” the Nickells said in a statement defending the punishment.

“Walk a mile in someone’s shoes,” the statement read. “We must undo at home what the world tries to tell her is better.”

Renee Nickell told the Northwest Florida Daily News that the family has had a hard time since Renee’s brother was killed in Afghanistan in December 2011. Her kids were close to him and his family, she explained, even taking vacations together. Since losing her uncle, Renee’s 13-year-old has become more defiant at home and at school, and her grades have dropped.

“We just felt like she just kind of gave up,” Renee told the newspaper. The family did not say whether they sought grief counseling for their daughter after her uncle’s death, or whether they thought her lack of interest in school was a sign of depression.

Holding a sign in public wasn’t their first choice for punishment. They tried grounding her before, but it didn’t help, they explained. They didn’t forbid her from attending activities at church, they said, because the activities were supposed to reinforce the Christian values they were struggling to instill in her. They didn’t confiscate her electronics because neither she nor their two younger children, ages 2 and 6, have any, they said.

“We just got to the point where we just didn’t know what else to do,” Renee told the newspaper. She said that she got the sign idea from a Christian counselor “several years ago,” and decided to start with a 90-minute public punishment. The girl’s dad stood next to her the whole time.

“At the end, she gave me a hug in front of the police officer and she told me she was sorry,” Gentry said.

But on Tuesday the Nickells were surprised to find out that their daughter’s punishment had gone viral, and were shocked by the anger leveled at them for their parenting choices.

“It makes me sad to think that this young girl had experienced such a painful loss recently and because she was acting out (as many, if not most young people do for a time) in response to that trauma, she was put on public display for her sins rather than receiving professional help/intervention,” commented Katherine Rebecca Newlin. “How would her parents (or any ONE of us!?) feel if they were made to stand on a public corner with any number of THEIR sins plastered all over a sign for the world to see?”

“Worst parents ever,” commented Asa Semaj of San Diego. “No one likes to be humiliated, especially a 13-year-old girl, by her own parents! 13-year-old girls have been know to kill themselves over less than this. The only thing she will learn from this is to hate her family.”

While people are criticizing the Nickells for the punishment, some who saw the “self-entitled” sign say they support the the family.

“I saw her Saturday morning while running errands, and I thought to myself, great job mom and dad!” Aundy Blocker of Crestview said on Facebook. “Do everything possible to keep your child on the right track! Kudos to you!”

The Nickells likely meant to call out their kid for being “selfish,” “self-centered,” or “entitled” (“self-entitled” isn’t a word) but even so, their message obviously got through to the teenager. They told the Northwest Florida Daily News that the girl’s behavior had improved since Saturday.

“I asked her, ‘Were you scarred? Traumatized?’” Renee told the newspaper. “She said, ‘No mom, I knew it was coming’.”