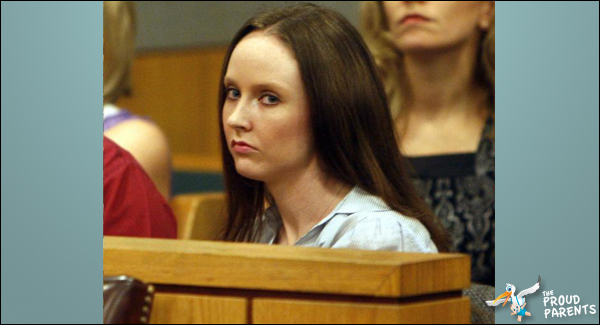 This is Emily Beth McDonald, the 23 year old mother of 3 that was sentenced to 20 years in prison after she was busted smearing feces on her daughters main intravenous line. After her child suffered many serious unexplained set backs during treatment for a “fever and chronic diarrhea”, the doctors set up a hidden camera in her room. Emily defends her actions saying that the doctors were going to take her daughter off antibiotics so she needed to raise her fever.. Keep reading for the full story of this truly bizarre edition of Proud Parents: IN THE NEWS

A mother caught smearing human faeces on her three-year-old daughter’s IV catheter has been jailed for 20 years.

Emily Beth McDonald, 25, from Austin, Texas, had admitted second-degree injury to a child and wept briefly during the hearing but said nothing.

Speaking outside court Bob Phillips, who defended McDonald, told the Austin American-Statesman she had put faeces on the catheter while the girl was hospitalised in 2009.

He said she wanted to elevate her daughter’s fever so doctors would continue an antibiotics treatment they had planned to stop.

At the time, McDonald was ‘under extreme psychological stress,’ Phillips said, and fatigue and depression contributed to that stress.

‘Obviously it was a criminal act, and it was wrong-headed, but it was done with a pure heart,’ he said.

According to arrest details McDonald told police she had smeared faeces on the girl’s central venous line five times during her daughter’s six-week hospital stay.

A central line is a catheter inserted into a patient’s chest or neck that leads to a vein or directly to the heart. It allows for the quick insertion of medication or fluids and monitors cardiovascular health.

Doctors set up a hidden camera in the toddlers’ room after repeated set-backs.

‘It doesn’t have any other rationale than any other form of child abuse would have,’ he said. ‘Our goal in this case was to protect Emily McDonald’s children and to hold her responsible.’

The girl is now ‘thriving and well and going to be fine,’ Phillips said.

She and McDonald’s two other children now live with their respective fathers.

The girl was admitted to Dell Children’s Medical Centre on April 15, 2009, with a high fever and ‘a long history of chronic diarrhoea.’