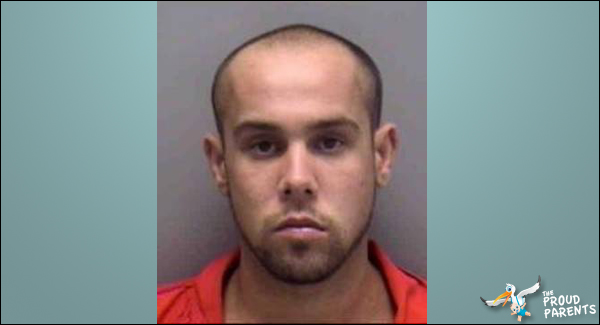 Above is Donald Rombough, the Proud Father that chose to get stoned and leave his 6-year old son in his unlocked pickup truck while he went in to Hooters to watch UFC with some friends. The best/worst part is, after a stranger found the little guy screaming hysterically – Donald exited the bar, advised the onlookers he hadn’t been there long and that he had to go back inside to eat the food he ordered. Keep reading for the full news story..

FORT MYERS: A Lee County man was arrested on charges that he left his 6-year-old son alone inside an unlocked pickup truck while he watched an Ultimate Fighting Championship match at a Fort Myers sports bar.

According to a sheriff’s report, shortly after 11 p.m. Jennifer Thomas and Jennifer da Vitoria spotted the boy crying hysterically inside a Chevrolet Silverado parked outside Stevie Tomato’s Sports Bar at 11491 S. Cleveland Ave.

When the women met with the boy and helped him out of the truck, he told them his father was inside Hooters, the report said.

While looking through the truck in attempt to contact a parent, Thomas reportedly spotted a marijuana smoking pipe.

EMS arrived on scene, treated the boy and determined he was not hurt.

Minutes later, Rombough walked out of Stevie Tomato’s, told witnesses that his son had only been alone for 20 minutes, then said he had to get back inside the bar because he had food waiting, the report said.

Rombough later told a deputy he wanted to leave the boy with his grandmother but couldn’t.

So, having already made plans to watch an Ultimate Fighting Championship match at the bar, Rombough said he decided to take the child along, according to the report.

Rombough said he decided to leave the boy inside the truck with its windows rolled down because the child was asleep when they arrived, and Rombough did not want to wake him.

Deputies said the outside tempterature was about 83 degrees while this took place.

The boy told Thomas and Vitoria he was alone in the truck for an hour and a half, according to the report. He said his dad left him alone in the car at Hooter’s earlier because he didn’t want to go inside.

During the investigation, the deputy recovered the marijuana pipe and also discovered a baggie of marijuana inside the truck, according to reports.

Rombough was arrested and taken to the Lee County Jail.