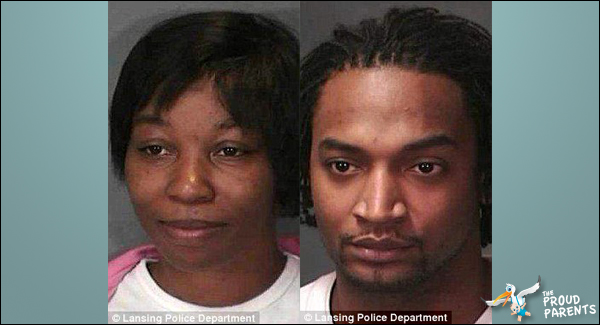 Pictured above staring slightly off to your left are two horrible parents: Shareka Sharrett McKinney, left, and Darell Livingston were arrested because they forced their 7 year old son to fight a school chum he had had a push-fight with the day before. Encouraging him by yelling things like “beat the boy” and to “go get him”, they watched as their 7 year old knocked another child around on the ground. A 73 year old crossing guard tried to intervene, but that only made matters worse as the parents then took to beating on him. Keep going for the full news story..

Two parents beat up a 73-year-old crossing guard who tried to stop a fight involving their seven-year-old son, who they forced to fight with another pupil, according to police.

Shareka Sharrett McKinney, 29, and Darell Livingston, 26, from Lansing, Michigan, were arrested yesterday after the altercation at a school bus stop on Thursday morning.

Lt Noel Garcia from Lansing Police Department said the parents’ son was involved in a school-boy fight at Lyons Elementary School on Wednesday.

He said it was a typical schoolboy fight when one boy pushed another. The boy was sent home as punishment, but McKinney and Livingston did not think that was adequate, according to police.

The next day they drove their son to the area, let him out and told him to beat the boy, which he did, knocking him to the ground with one punch

Lt Garcia said: ‘They told their son to go get him, go assault him, go fight with him, so their son did that and knocked down the other seven-year-old to the ground.’

When the crossing guard James Thompson intervened, they both starting beating on him, Lt Garcia told the Lansing State Journal.

They are being held on possible charges of assault and battery and contributing to the delinquency of a minor.

Michael LaVasseur was there at the time of the attack and though legally blind, said he heard everything, enough to make sense of what happened.

Mr LaVasseur walks his daughter and her two friends to the bus stop every day.

He said: ‘I’m sitting there talking to the crossing guard, next thing I know a car pulls up real fast against a curb, hit the curb, went over it, the female jumps out and starts swearing at the little boy.

Police said the father punched 73-year-old Mr Thompson in the mouth, chipping one of his teeth, while the mother came at him from behind.

The father turned himself into Lansing Police on Friday afternoon and McKinney was later arrested.

Lt Garcia said: ‘The crossing guard took some substantial strikes to the head so he’s going to be a little sore.’

Mr Thompson, who has been a crossing guard for 15 years, did not require medical attention and was back out on the road the next day.