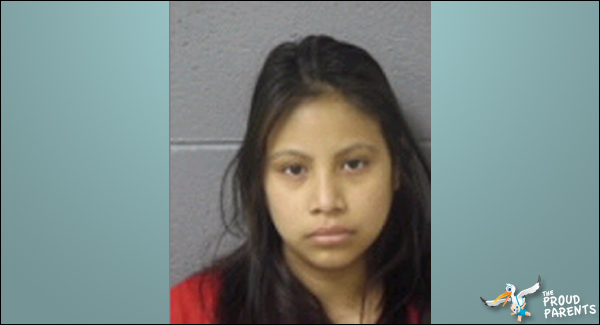 Pictured above is Jessica Cruz, the 19 year old that admits to concealing her pregnancy, birthing the child in a Salvation Army bathroom, putting it in a garbage bag and tying it off at the child’s neck, all before placing it in a garbage can and covering it with paper towels to die. It is believed the child died just 6 minutes after birth. Share this story with everyone you know using the buttons below. Shine light on this horrible crime and maybe, just maybe, this woman will get the life sentence she deserves. Keep reading for the full news story..

Prosecutors say that was the life span of the full-term, newborn boy whose 19-year-old mother is accused of strangling moments after she gave birth Friday in the employee restroom of a Streamwood Salvation Army store.

Cook County Judge Jill Cerone Marisie on Wednesday ordered the baby’s mother, Jessica Cruz, held without bail as she awaits trial on charges of first-degree murder and the concealment of a homicide death.

The ruling came during a hearing in which Cook County Assistant State’s Attorney Maria McCarthy detailed the brief life and violent death of the infant, which she said “resulted from exceptionally brutal or heinous behavior indicative of wanton cruelty.”

Cruz, of the 2000 block of Osage Lane in Hanover Park, could face a sentence ranging from 20 years to life in prison if convicted.

The Hanover Park woman entered the Salvation Army store at 1080 S. Barrington Road about 10 a.m. Friday and asked to use the restroom, McCarthy said. She gave birth in the employee restroom and, without even determining the gender of the child, put the newborn into a garbage bag, tied the bag tightly around his neck, placed him in a trash can and covered him with paper towels.

In a videotaped statement to police, Cruz said she concealed her pregnancy from everyone except for the baby’s father, McCarthy said. Cruz further admitted that the baby was alive and moving when she put him in the garbage bag and tied it around his neck.

Prosecutors claim Cruz deceived investigators by identifying herself as her mother and stating she had not seen her daughter in four months when a detective called asking about her whereabouts. Cruz later admitted the lies, McCarthy said.

Police arrested Cruz Tuesday morning at her Hanover Park home and she remains the “sole person charged in this incident at this point,” Keegan said.

Authorities say Cruz, who graduated high school earlier this year, has no criminal background. She next appears in court on Dec. 2.

Several neighbors said they don’t recall ever seeing a young pregnant woman around the two-story home on Osage Lane where police say Cruz lived. However, they believe Cruz could have recently started staying there as one of the many temporary borders known to come and go.

Others who participate in the village’s Neighborhood Watch program said that aside from a few occasions when loud music was a nuisance, there haven’t been any problems at the home.

Several people who answered the door at Cruz’s residence said they were instructed by police not to talk to anyone and declined to comment.

Emmanuel Nwabuego, who lives across the street, said his wife regularly brings leftover food from the couple’s church to the husband, wife and children who’ve lived at the home for several years. He’d never seen anyone matching Cruz’s description, either.

“There are new faces all the time, but I’ve never seen a pregnant person,” Nwabuego said. “They’ve always been quiet, nice neighbors.”

A Cook County assistant medical examiner ruled the death a homicide with strangulation as the cause of death. The medical examiner indicated the victim was born alive and survived between 3½ and 6 minutes, McCarthy said.