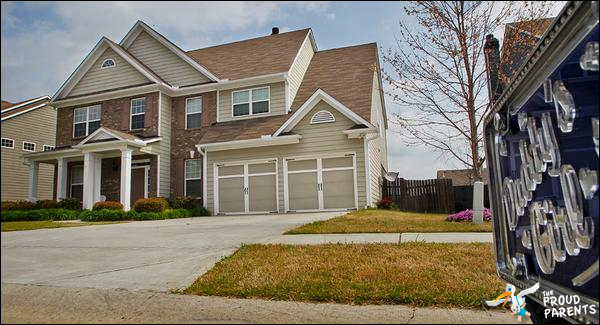 The house above belongs to Sgt Karen Moore – well at least it did, until her 15 year old daughter shot her in the back of the head. The two had been arguing about the girls boyfriend, who was two years older than her. After shooting her mother at approximately 9pm, she called her boyfriend and invited him over for sex upstairs. Yup, while her mother lay dead on the couch below, she was banging her boyfriend upstairs. Gross. Keep going for the full news story..

A 15-year-old girl has been arrested after she allegedly shot her mother and then had sex with her boyfriend while the dead body lay on the sofa downstairs.

The body of 42-year old Karen Moore, a U.S. soldier, was found at her home in Braselton, Georgia, on Thursday. Her teenage daughter has confessed to the murder.

Police said Sgt Moore was watching television when she and her daughter had an argument over the 15-year-old’s relationship with an older boy.

The daughter allegedly then got her parents’ gun out of the wardrobe and shot her mother in the back of the head at around 9pm on Wednesday.

Officers said the girl then invited a boy to the house, Christopher Neives, 17. He has been charged with having sex with a minor, but has denied any involvement in the killing.

He told police that he had met the 15-year-old in January and that it was not a ‘drawn-out relationship’.

The crime was not reported until 1pm the next afternoon, when police said she told a neighbour that something was wrong with her mother.

When it would not work she asked a neighbour to jump start the vehicle and told them that she could not get her mother to wake up.

Police found a gun and Mrs Moore’s purse in the 15-year-old’s car. Solis added that after hours of interviews the daughter confessed to firing the gun.

Mrs Moore was on active duty with the U.S. army and had been serving as a recruitment officer in Georgia.

Asst Police Chief Solis told Channel 2: ‘They give their lives to fight overseas in areas like Iraq and Afghanistan, and then, they are home, where they feel safe, and then, something happens that is not supposed to happen.’

Mrs Moore leaves a husband and son, who both service in the military.