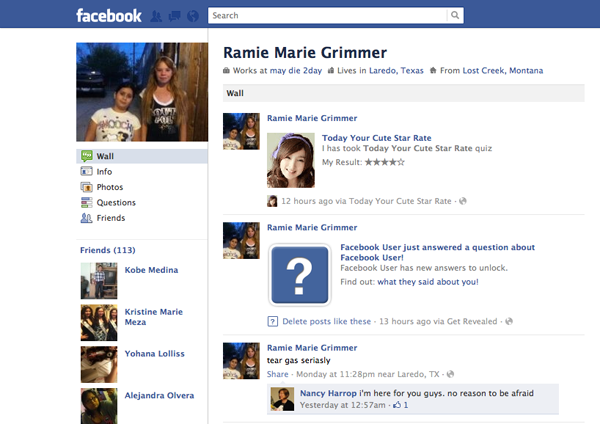 A mother in Texas shot her two children, then turned the gun on herself after a seven hour standoff at a Health and Human Services office in Laredo.

The children, 10 year-old Timothy and 12 year-old Ramie are in critical condition at University Hospital in San Antonio.

Rachelle Grimmer, 38, confronted employees about a food stamp application that she submitted in July. At one point she pulled out a firearm and demanded to speak to the manager. The manager talked Grimmer into letting the other employees go free in exchange for him. ”He told the woman he would remain with her,” a Laredo police officer said. “He acted quite courageously.”

Police negotiators were brought in to talk to the woman on the phone, but Grimmer repeatedly hung up, according to MSNBC. at around 7 P.M. the manager was allowed to go free while Grimmer and her two children remained inside the government building. Police continued to talk to the woman, but just before midnight Grimmer hung up on negotiators one last time. Three shots were heard from outside and as SWAT stormed the building they found the two injured children and the body of Grimmer.

According to police, ”The overall understanding is that this was more than just a one-issue crisis.” The feeling they got was that Grimmer felt she was owed something and the standoff “wasn’t like a knee-jerk reaction.”

Stephanie Goodman, a spokeswoman for the family services office in Laredo told reporters, “She originally applied for the stamps on July 7. We scheduled an interview by phone with her, but couldn’t reach her after repeated attempts.”

“We were still waiting, and if we had that, I don’t know if she would still qualify or not,” Goodman said.

Activity on Ramie Grimmer’s Facebook page was being updated as the tragic events were unfolding. At 6:50 P.M. on Monday the 12 year-old updated her work status to say “may die 2day”. Later at 10:28 P.M. Ramie posted on her wall “tear gas seriasly”, apparently in response to tear gas being released into the Health and Human Services building. A mutual friend of all three Grimmers on Facebook replied to that post saying, “i’m here for you guys. no reason to be afraid”.

The family had reportedly moved to Texas from Ohio, and Grimmer complained to negotiators about various agencies of government. According to Facebook, the family was originally from Lost Creek, Montana, near Beaverhead National Forest and the city of Anaconda, where the 38 year-old Grimmer went to high school.