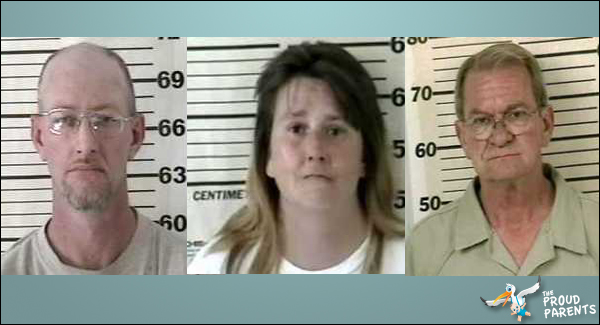 On the left we have James Clarence Davis, the middle is his wife Sandra Davis and on the right is their used car salesman Robert Bearden. You may be wondering why their car salesman is being featured along side them on TheProudParents.com – and unfortunately, it’s not because he’s paying us for a plug.. The Davis’ couldn’t afford the $281.00/month payment for their 1998 Dodge Caravan, so instead of doing anything else in the world aside from what they chose to do, the Davis’ offered up their 14 year old daughter for sexual favours to Bearden as payment. He accepted. Read the full story after the jump..

A central Georgia couple has pleaded guilty to having their 14-year-old daughter engage in sex with a man so that they would not have to make monthly payments on their secondhand minivan.

Sandra Davis, 37, of Dodge County, pleaded guilty to child molestation and was sentenced to eight years in prison on Monday. Davis did not physically abuse her daughter, but she did admit to encouraging her to trade sex for the van payments, The Macon Telegraph reported.

Davis’ husband, James Davis, 39, and used-car salesman Robert Bearden, 67, both pleaded guilty to molestation. They were sentenced to 10 years in prison and 10 years probation.

The Davises and Bearden were arrested in March 2010 after authorities learned of the car-payment arrangement during the course of an unrelated investigation. According to police, the Davises had their daughter do “sexual favors” for Bearden, then manager of Shorty’s Used Cars in Eastman, so they would not have to make their monthly payments of $281 on the 1998 Dodge Caravan they had bought.

“It makes me personally sick to my stomach,” Dodge County sheriff’s Capt. Tony Winborn told the Telegraph after the arrests were made.

The judge who sentenced the defendants also barred them from having any contact with the victim for 20 years.

Oconee Circuit District Attorney Timothy Vaughn did not immediately return calls for comment from AOL News. According to the Telegraph, he said that the girl, now 16, is now in a “good home environment.”