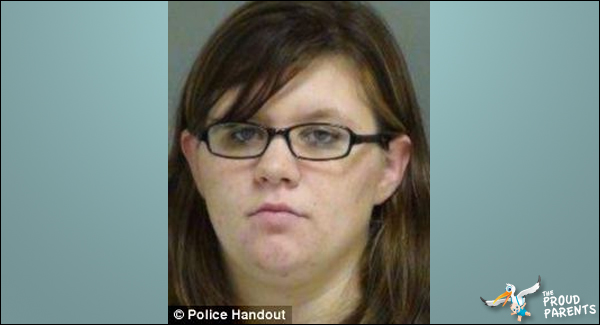 Pictured above is Jackie Burkle, the 22 year old mother that confessed to murdering her newborn twin daughters. Police were sent to Burkle’s house when a co-worker noticed she was pregnant one shift and then two days later was much smaller, concerned for her health she contacted police. Conveniently, Burkle lived right across the street from the police station and after submitting to testing to prove she had recently been pregnant, Burkle told the police they could find her daughters in the trunk of her car. Read the full news story and check out the video coverage after the jump.

An woman allegedly killed her newborn twin daughters and abandoned them in the trunk of her car, after giving birth at home.

Jackie Burkle, 22, of Huxley, Iowa, has been charged with two counts of first-degree murder after police found the infants’ bodies in her car.

Incredibly the car was parked in front of her home, across the street from the police department in the town of about 2,800 people, about 20 miles north of Des Moines.

According to court records, police went to the duplex where Burkle lived after receiving a call to check on her.

Court records show Burkle was seen January 5 at work and ‘appeared to be pregnant.’ She was seen at work two days later and did not appear to be pregnant ‘with a completely different appearance.’

Police have released few details but said Wednesday that Burkle lived with her parents.

Huxley Police Chief Mark Pote said Burkle is not married and that investigators were working to identity the children’s father. Burkle has no other children, he said.

He would not say how the children died.

‘There’s going to be a lot of unanswered questions for everyone, including law enforcement, for a while,’ the chief said.

Autopsies were performed Monday but final results, including lab tests, will not be available for four to six weeks.

Burkle made her initial court appearance Wednesday and was being held in the Story County jail on $1 million bond.

Bill Walljasper, a spokesman for Casey’s General Store, said a co-worker of Burkle’s called police after noticing a physical change in her appearance and became concerned about her health.

He said Burkle, who had worked at the store for more than six months, was scheduled to work the day police were called. She had come into the store but Walljasper said he didn’t know if she came in to work or as a customer.

The store is only a few blocks from Burkle’s home.

Michael Motsinger, special agent in charge with the Iowa Division of Criminal Investigation, said the infants survived the birth but he did not know if they were full-term.

Court records show when police arrived at her home Burkle agreed to go to a hospital and have a blood test that indicated she had been recently pregnant. She acknowledged she gave birth to twins and told officers where to find the bodies.

She also acknowledged that she ‘acted or committed certain acts to terminate the lives’ of the babies on January 6, court records show.

Motsinger declined to elaborate on how the infants were killed, citing the ongoing investigation.

A preliminary hearing was scheduled for January 20. If convicted of first-degree murder, Burkle would face a mandatory sentence of life in prison without parole.