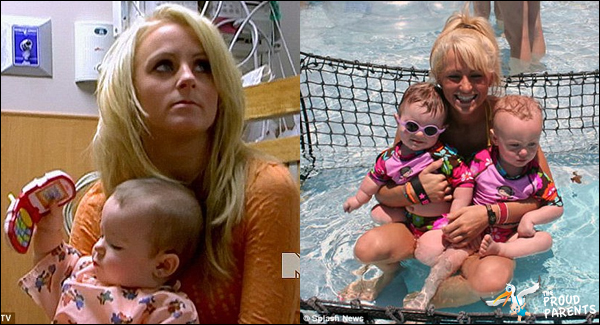 Leah Messer, the f-cking moron pictured above and star of Teen Mom 2 is pregnant again with another set of twins. The 19 year old, who already has twins with exhusband Corey Simms, is reportedly excited about the new information and can’t wait to have them. Yup, you guessed it, the dumb b-tch thinks she’s the next Kate + 8.. her words, not ours. On top of all that, she now wants to marry her new boyfriend. She believes a reality show can be built around her life and save her from the financial troubles she’s currently in – which they probably will do. Wooo MTV! Check out the full news story after the jump..

Courtesy of DailyMail.co.uk
By Mike Larkin and Jade Watkins

Teen Mom 2’s Leah Messer is pregnant with twins for the second time, it has been claimed.

The 19-year-old, who already has twin girls with ex-husband Corey Simms, made the discovery last week according to In Touch magazine.

‘She just found out last week,’ an insider told the magazine.

While many young mothers at such a tender age may be daunted by the development, Messer was said to be ‘absolutely thrilled,’ an insider told the magazine.

There are rumours she is now trying to land her own reality show.

The nursing student who is pregnant to her boyfriend Jeremy Calvert, is currently struggling financially as she tries to raise her family and get through school.

‘She thinks the babies will help her get her own spin-off show,’ the insider told the magazine.

In fact Messer is said to have set her sights on becoming the next Kate Gosselin, who rose to fame following her own reality TV show Kate Plus 8.

‘She wants her own series and her own brand, just like Kate!’ the source added.

It was just last week when it emerged that the mother-of-two was both reportedly pregnant again, and engaged to new boyfriend Calvert.

The reality television personality refused to deny she was expecting again when grilled by her army of fervent Twitter supporters.

And according to US Weekly, a source confirmed she also agreed to marry Calvert.

It follows her brief marriage to the father of her two-year-old twin girls, Corey Simms.

They were only married for six-months before Leah decided to file for divorce in Elkview, West Virginia last April.

The source claimed to Us Weekly: ‘Leah just got engaged over the holidays and is pregnant with another child. She is so excited!’

When pressed by a fan on Twitter about whether she was expecting, she said: ‘If I never trusted you before, what makes you all think I can trust you with this.’

She also refused to reply to further question on the matter.

The revelation follows her admissions last month that she and Calvert were discussing the possibility of getting hitched.

She said they ‘do talk about getting engaged,’ adding: ‘We have a really good connection.

‘It’s different from Corey and my relationship, because we were kinda like forcing it.

‘With Jeremy, you know when you’re supposed to be with somebody and you’re not.’