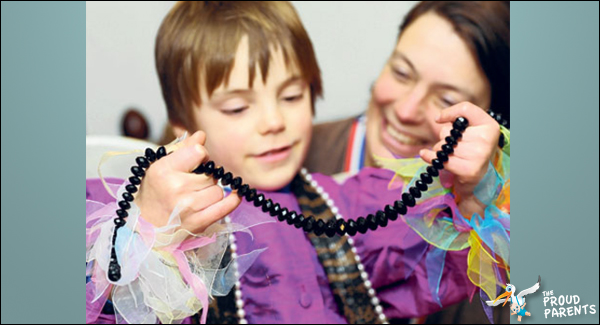 It’s a boy! And has been for the last 5 years, but up until recently not too many people knew this. Beck Laxton, 46, and partner Kieran Cooper, 44, have spent half the decade concealing the gender of their son, Sasha. Keep going for the full news story on why they kept it a secret, and what their plan is for the future – and let us know what you think about the whole situation in the comments..

“I wanted to avoid all that stereotyping,” Laxton said in an interview with the Cambridge News. “Stereotypes seem fundamentally stupid. Why would you want to slot people into boxes?”

Take a look at the most controversial parenting stories of the year.

Laxton, a UK-based web editor, and her partner, Cooper, decided to keep Sasha’s sex a secret when he was still in the womb. The birth announcement stated the gender-neutral name of their child, but skipped the big reveal. Up until recently, the couple only told a few close friends and family members that Sasha was a boy and managed to keep the rest of the world in the dark. But now that he’s starting school the secret’s out.

For years, Becks has been referring to her child, the youngest of three, as “the infant” on her personal blog. But guarding the public from her son’s gender was only part of her quest to let her kid just be a kid.

Sasha dresses in clothes he likes — be it a hand-me-downs from his sister or his brother. The big no-no’s are hyper-masculine outfits like skull-print shirts and cargo pants. In one photo, sent to friends and family, Sasha’s dressed in a shiny pink girl’s swimsuit. “Children like sparkly things,” says Beck. “And if someone thought Sasha was a girl because he was wearing a pink swimming costume, then what effect would that have? ”

Sasha’s also not short on dolls, though Barbie is also off limits. “She’s banned because she’s horrible,” Laxton says in the Cambridge interview.

On a macro level she hopes her son sets an example for other parents and makes them reconsider buying their own sons trucks or forcing their daughters into tights. She’s seen how those consumer trappings affect how and who kids play with in the sandbox.

But the sandbox is just a precursor to the classroom. When Sasha turned five and headed to school, Laxton was forced to make her son’s sex public. That meant Sasha would have to get used to being a boy in the eyes of his peers. Still, his mom is intervening. While the school requires different uniforms for boys and girls, Sasha wears a girl’s blouse with his pants.

“I don’t think I’d do it if I thought it was going to make him unhappy, but at the moment he’s not really bothered either way. We haven’t had any difficult scenarios yet.”

Last year another couple, Kathy Witterick, 38, and David Stocker, 39, of Toronto made a similar decision when they had their baby, Storm. At the time, certain psychiatric experts voiced concern over their decision. “To have a sense of self and personal identity is a critical part of normal healthy development,” Dr. Eugene Beresin, director of training in child and adolescent psychiatry at Massachusetts General Hospital, told ABC News. “This blocks that and sets the child up for bullying, scapegoating and marginalization.”

But as parents well know, bullying is hard for any child to avoid. It’s more important to raise someone who’s confident enough in himself to overcome peer pressure. It’s also important to have his parents have his back (remember the mom who defended her son’s choice in a Halloween costume?) Maybe Sasha’s early years will be character building, maybe he’ll have a higher emotional quotient being raised with dual perspectives on gender. Or the reverse could be true: Sasha may have less of a formed identity because of his upbringing, and feel angry at his mom for dressing him in flowery shirts and telling the world about it. Then again, maybe he’ll get over it.

As for Laxton, she says she’s open to her son pursing any career or sexual preference he chooses as he matures. “As long as he has good relationships and good friends,” she says, “then nothing else matters, does it?”