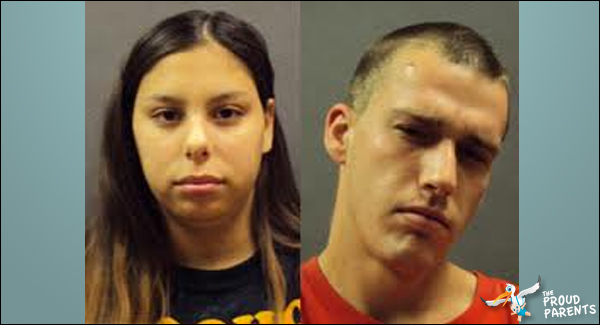 This is probably the saddest Proud Parents: In The News feature we’ve ever done. Pictured above is Staci Lynn Barbosa and Jonathan Edward Vandergriff, accused of first degree murder in the death of their one month old son. The child was brought to the hospital with his eyes swollen shut, several broken ribs, a broken femur, was malnourished, dehydrated, and showed signs of sexual abuse and shaken baby syndrome. The most recent story we can find on this says the the couple wasn’t facing the death penalty, does anyone know more? Regardless, check out the full news story after the jump.

A Bullhead City couple was arrested yesterday after their 1-month-old baby died as a result of what police are calling a “brutal sexual assault.”

Montague — for good reason — wouldn’t go into detail about the sexual attack but says authorities believe both Barbosa and Vandergriff were involved in raping their one-month-old son.

According to police, at 11:20 a.m. yesterday, police were called to Western Arizona Regional Medical Center’s Emergency Room where a baby was “fighting for his life.”

Police say they saw bruises and sores all over the baby’s body and his eyes were red and swollen shut.

Doctors then told police the baby had several broken ribs, a broken femur, was malnourished, dehydrated, and showed signs of sexual abuse and shaken baby syndrome.

The baby was airlifted to Sunrise Hospital in Las Vegas — the closest hospital with a trauma center, according to Montague — and Barbosa, who brought the one-month-old to the hospital, was immediately taken into custody.

Doctors were not able to save the baby and he died early this morning.

Vandergriff turned himself into authorities yesterday and police served a search warrant at the house where the couple had been living, which turned up marijuana and other items of “evidentiary value.”

Vandergriff and Barbosa were arrested for molestation of a child, child abuse, aggravated assault, and sexual conduct with a minor.

Police say more charges are on the horizon for the two, including murder. Both parents were booked into the Mohave County Jail in Kingman where Vandergriff is being held on a $500,000 bond and Barbosa’s bail was set at $250,000.