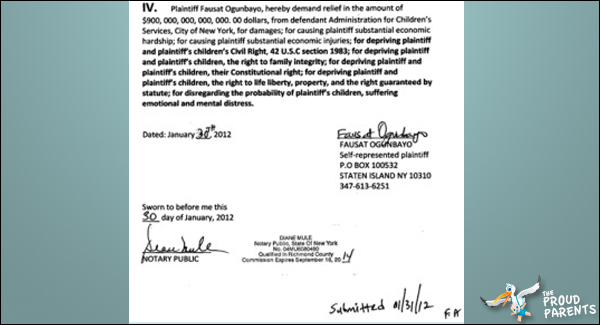 Alright so I’m a little confused; A Staten Island mother is suing the state for $900 Trillion dollars. To be honest though, that’s really not the strangest part of this case – that would be the fact that the state took Ms Fausat Ogunbayo’s children away, without actual reason, 3 years ago. Stating she was not mentally capable of caring for her children, who at the time had almost perfect school attendance records, perfect health, and were excelling in academics. If that wasn’t strange enough, Ogunbay has had all charges of child neglect dropped due to lack of evidence. So why on earth are they taking children away from a perfectly capable (albeit, strange) mother? This is the shit that destroys families, that causes people to go insane. Continue reading for the entire news story..

Staten Islander Fausat Ogunbayo, 46, has filed a $900 trillion federal suit against the City Of New York for placing her two children in a foster home over three years ago.

In court documents filed last week, Ogunbayo has accused the Administration for Children’s Services and city for causing economic hardship, substantial economic injuries and violating her and her children’s civil rights. Her sons, removed in June 2008, are now ages 16 and 13.

According to the Staten Island Advance:

Ms. Ogunbayo alleges she and her children have suffered “over three years of terror, horror, grievous harm, time lost, substantial economic hardship and injuries” due to their separation.

In removing the boys, the city contended Ms. Ogunbayo was mentally unstable and had refused treatment, said court papers. She allegedly suffered from hallucinations and delusions, and also left the boys at home alone for extended periods while she was working, the city maintained.

Ms. Ogunbayo, who is representing herself, has branded the allegations a “huge lie.”

Further, in her complaint she states the city “recklessly disregarded” her “right to family integrity.” Ogunbayo no doubt took note of a state Appellate Division from January in a separate case vacating the neglect charge by Family Court due to lack of evidence the boys were in “imminent danger.”

In fact, the youngsters had “near-perfect” attendance in school and “were doing well, even thriving, academically,” while in their mother’s care, the appellate division said. In addition, the boys were up to date on their medical examinations and vaccinations, and their heights and weights were appropriate for their ages, said the court.

The net effect of the forcible removal of your kids is soul-murdering. But $900,000,000,000,000? For perspective: Among the largest settlements ever in New York City is $9.9 million in a case from 2010, in which a man was jailed for 19 years after he was framed for murder by a corrupt detective. The national debt is $15 trillion.

“It’s hard to even take it seriously,” says Kate O’Brien Ahlers, a spokesperson for the city Law Department. “There may be case, which is for a court of law to decide, but that’s a made up number.”