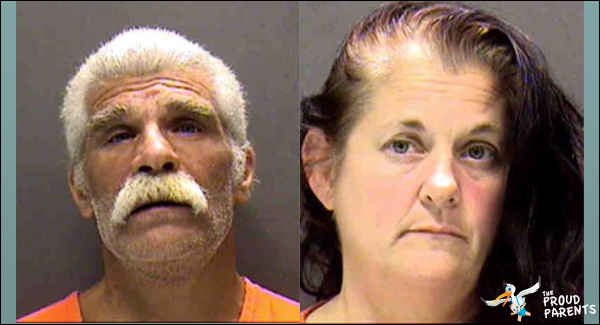 Pictured above is Paul and Belinda Berloni, the super-cool grandparents that decided to get drunk and drag their 7 year old grandaughter around behind their SUV while she was in her PowerWheels car. Isn’t this something dumb teenagers do? Regardless, you’d think if you’re going to do something that stupid you’d equip the girl with some protective gear, right? That’s the complete opposite of what these folks did.

A Florida couple is facing child endangerment charges after they reportedly towed their 7-year-old granddaughter behind their SUV in a toy car after having a few beers Sunday afternoon, MyFoxTampaBay reports.

47-year-old Belinda Berloni admitted to MyFoxTampaBay that, in hindsight, it was a “stupid idea” to tow her granddaughter behind her SUV by attaching the child’s toy car to a dog leash tied to the car.

Belinda Berloni says she and her 49-year-old husband Paul Berloni had consumed “a few beers” before the incident.

“We took this and hooked it around the hitch of the truck and drove about five miles an hour up and down the street with her,” she told MyFoxTampaBay, holding-up two dog leashes, which were still connected.

Belinda Berloni says she sat with her feet dangling over the back gate of the car as they pulled the child, who was only wearing a bathing suit, three or four times up and down an access road. However, she says she didn’t think the child was in any danger.

Belinda Berloni tells MyFoxTampa Bay they were about to make their last run when they were stopped by sheriff’s deputies.

“Well, I thought they were just gonna tell us we couldn’t do it,” she told MyFoxTampaBay. “Give us a warning, say, hey, this isn’t very safe, maybe this is not a bright idea.”

However, sheriff’s deputies took the matter more seriously, especially because Paul Berloni reportedly has as many as four DUIs and was driving with a suspended license.

The couple was arrested, and Paul Berloni remains in jail. Belinda Berloni was able to make bail, and is now on supervised release. They face child endangerment charges.

Belinda Berloni told MyFoxTampaBay despite the charges, she loves her grandchildren and would never put them in harm’s way. She added that her son was angry with her over the incident, and it is a lesson learned.