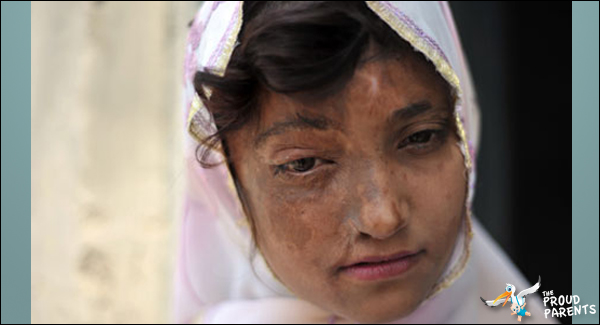 Pictured above is a 10 year old girl from Central Pakistan, scarred from acid that had been thrown in her face. This type of assault is common in Pakistan, with thousands suffering the same fate each year. Including Anvu Sha, a 15 year old recently murdered by her parents in this “honour style” killing. Her crime? Talking to a boy. Her parents told hospital workers their daughter tried to commit suicide, but when they wouldn’t let the rest of the family see the face of the deceased girl at the funeral, the eldest sister grew suspicious. Continue reading to check out the entire, shocking, news story..

Parents Kill Daughter By Pouring Acid On Her Face

A mother and father in Pakistan-administered Kashmir killed their 15-year-old daughter by dousing her with acid after seeing her talking to a young man, police say.

Local police officer Tahir Ayub told Agence France-Presse the father, Mohammad Zafar, was already suspicions about his daughter Anvu Sha and became enraged when he saw her with a boy outside their house in Kotli on Monday.

“Zafar beat her up and then poured acid over her with the help of his wife. She was badly burned, but they did not take her to hospital until the next morning, and she died on Wednesday,” Mr. Ayub said.

“There were third-degree burns on her scalp, face, eyes, nostrils, both arms, chest foot and lower part of legs. Even her scalp bone was exposed,” he said, adding the mother initially told the hospital their daughter had tried to commit suicide.

Police were alerted by Anvu Sha’s married elder sister, who demanded they investigate the incident in Khoi Ratta district, 140 kilometres north of the state capital, Muzaffarabad.

They say she became suspicious when her parents did not allow mourners to see the face of the dead girl before she was buried, otherwise a normal practice in Kashmiri Muslim society, the BBC reported.

Police have now arrested the parents and charged them with murder.