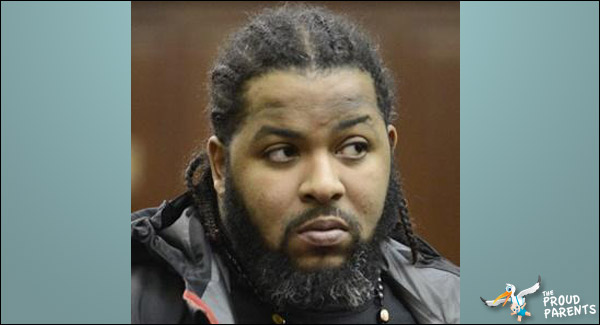 An overprotective dad was so hellbent on setting his daughter straight that he showed up at her Midtown high school yesterday morning swinging a heavy chain with a padlock and demanding to speak to the principal.

“Who’s f–king my daughter?” 35-year-old Michael Canaii (pictured, at his arraignment last night) barked at the HS of Graphic Communication Arts on West 49th Street, according to a school source.

“He was yelling and complaining that his daughter was smoking weed and not listening to him, and he wanted the school to do something about that,” said a law-enforcement source.

The hulking Canaii, who was wearing all black, also insisted on talking to his daughter when he first showed up at the school at about 9 a.m.

“A man was outside with a chain. He was saying, ‘Where is my daughter?’ ” said a student. “He was swinging the chain saying, ‘I’m going to f–k you all up.’ One guy said something sly, and he took off after the guy and ran into the school.”

Inside, he threatened to fight anyone in his path, the school source said. Security cleared the lobby and students were blocked from entering, the source said. But his only crime — besides alleged criminal possession of a weapon, menacing and pot possession — was caring too much.

“[He] asked two students to take their stuff off and fight him in the lobby. He also asked security agents and a dean to ‘fight’ him as he was swinging a big chain around yelling, ‘No one is going to touch me,’ ” said the source.

Canaii was briefly hospitalized after his arrest and was arraigned last night in Manhattan Criminal Court.

His lawyer said Canaii went to the school because he feared his daughter was involved in gang activity.