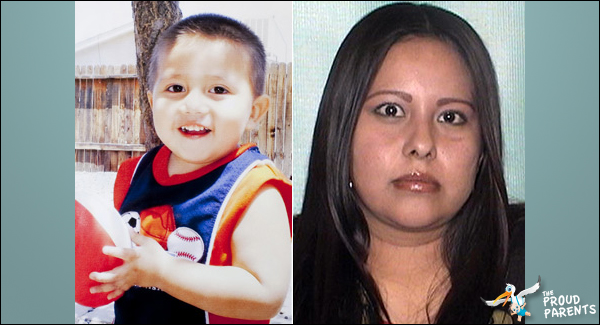 Meet Tiffany Toribio, the 23 year old New Mexico mother that murdered her son not once, but twice. This disgusting waste of skin suffocated her son, Tyruss (pictured left), in a local park after being kicked out of a friends place late one night. Toribio, after realizing what she had done and feeling guilty attempted to revive her son and was successful. Once breathing again, she decided to go through with her original plan and suffocated him to death. Continue reading for the full news story..

News story courtesy of HeraldSun.com.au
By Carly Crawford in New York
AN American mother suffocated her son, revived him, then suffocated him again before burying his tiny body in a public playground.

New Mexico mum Tiffany Toribio, 23, confessed to the shocking crime eight days after she dug a hole and buried three-year-old Tyruss before dawn.

She had smothered him to death in his sleep.

The murder came to light on Saturday after a woman spotted a black shoe sticking out the sand in Alvarado Park.

As police launched a nationwide appeal for clues to the boy’s identity, heartbroken locals nicknamed him “Baby Angel”, leaving him flowers, plaques and candles at the site.

Yesterday, Ms Toribio contacted police and told them she would turn herself in.

She gave them a false identity when they arrived to pick her up, but eventually spilled the details.

“She placed her hand over her son’s mouth and nose and suffocated him,” police chief Ray Schultz said. “She had second thoughts about what she did.”

She performed CPR on her son, brought him back to life and then decided to go forward with that original act she had started to commit,” Mr Schultz said.

He said she remained severely traumatised.

“What makes this story especially sad is, when asked the reason why she took Ty’s life, Tiffany said that she did not want him to grow up with no one caring about him, the same way that she had grown up where nobody had cared about her.”

Ms Toribio was on suicide watch in detention, he said.

Mr Schultz said there had been no reports of child abuse filed against Ms Toribio, but he said family members indicated that she did not express the typical love of a mother for her child.

“She did not show the normal relationship that you would see with a mother, son,” he said.