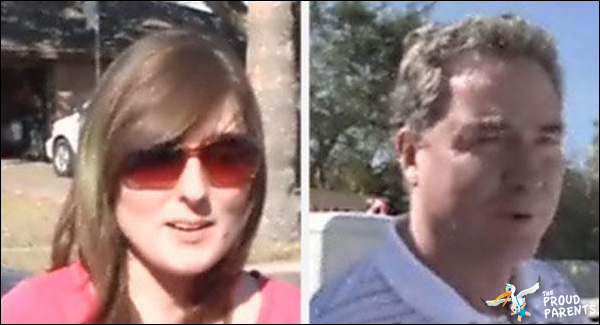 Yesterday we showed you that horrible video of Judge William Adams beating his disabled 16 year old daughter for illegal downloading, today he is now claiming to have done nothing wrong. “In my mind, I haven’t done anything wrong other than discipline my child after she was caught stealing,” says Adams “And I did lose my temper, but I’ve since apologized.” – well sir, I’d like to know how well that apology would go over in your courtroom if the person on video was some (other) redneck dad abusing his daughter. Again, we ask that you please take a moment and share these articles using the buttons below the posts with everyone you know, this story needs to be made as public as possible. Continue reading for the news story..

PORTLAND, Texas — The daughter of a Texas judge who posted a YouTube video last week of the savage beating she received at his hands says she has experienced an outpouring of support, but feels some regret for making it public.

Hillary Adams said that, until last week, only a couple of close friends knew about the 2004 beating by her father, Aransas County Court-at-Law Judge William Adams, who handles child abuse cases. He is now the subject of a police investigation.

He says he did nothing wrong.

The 8-minute video showing her father lashing her 17 times with a belt and threatening to beat her “into submission” had been watched more than 1 million times by early Thursday.

“I’m experiencing some regret because I just pulled the covers off my own father’s misbehavior after so many people thought he was such a good person. … But so many people are also telling me I did the right thing,” she told The Associated Press outside her mother’s home in the town of Portland, on the state’s Gulf Coast near Corpus Christi.

“He’s supposed to be a judge who exercises fit judgment,” she said.

No one answered the door Wednesday at the judge’s home, repeated calls to his office rang unanswered and his attorney did not respond to phone messages seeking comment. A neighbor said she saw Adams and his girlfriend packing luggage, a briefcase and rifles into their truck, as if to leave for a while.

Corpus Christi television station KZTV caught up with the judge while he was getting into his vehicle Wednesday, and he confirmed it was him in the video. But he said it “looks worse than it is” and he doesn’t expect to be disciplined.

“In my mind, I haven’t done anything wrong other than discipline my child after she was caught stealing,” Adams said. “And I did lose my temper, but I’ve since apologized.”

When told of her father’s comments, Hillary Adams said, “It’s a shining perfect example of his personality and he believes he can do no wrong. … He will cover up rather than admit to what he did and try to come clean, which is what I really want him to do.”

She stressed that she did not post the video as revenge and does not want her father punished. Rather, she did it because she thinks it will force him to seek help, and because he has been harassing her and she thought posting the clip would make that stop.

“We need to reach out to victims and the abusers themselves to get people to realize what it actually is,” she said.

Hillary, who was 16 at the time, said she secretly videotaped the beating in her bedroom because she “knew something was about to happen.” She says her parents were angry at her for using her computer to download pirated content over the Internet.

In the clip’s opening seconds, William Adams is heard telling Hillary’s mother, “Go get the belt. The big one. I’m going to spank her now.” With belt in hand, he turns off the light and tries forcing his daughter to bend over the bed to be beaten, but she refuses.

“Lay down or I’ll spank you in your (expletive) face,” Adams screams while he lashes her with sweeping blows across the legs, ignoring her wails and pleas for him to stop.

A few minutes into the video, Hillary’s mother barks at her to “turn over like a 16-year-old and take it! Like a grown woman!” For about a minute, the ordeal appears to have ended after both parents leave the room and shut the door. But the judge then storms back into the room and the beating resumes.

Child advocates roundly condemned the beating as abuse. But investigators may decide that the judge’s actions, while shocking, weren’t criminal.

The lines between what’s deemed child abuse and what’s considered an acceptable level of discipline differ in various parts of the United States and among various social groups, though the use of objects such as belts and sticks is usually seen as beyond any normal physical punishment, said David Finkelhor, a University of New Hampshire sociology professor who heads the school’s Crimes against Children Research Center.

Jim Hopper, a clinical instructor in psychology at Harvard Medical School and a child abuse expert, said there is no doubt that the judge’s actions crossed the line.

“This is an act of brutal violence,” Hopper said. “To beat someone into submission is not discipline. To beat a child into submission makes it harder for that child to take in rules and the values that the parent believes they are imposing on the child.”

Loyola Law School Criminal Law Professor Laurie Levinson told CBS News, “There is no way to justify what happened in this video.”

Levinson says she believes it would be a hard case to prosecute. “This happened several years ago, and the statute of limitations has passed,” she says. “The second thing is that in Texas, like in some other states, there’s an exception for corporal punishment.”

Adams, Aransas County’s top judge, was elected in 2001 and has dealt with at least 349 family law cases in the past year alone, nearly 50 of which involved state caseworkers seeking determine whether parents were fit to raise their children.

Patrick Crimmins, a spokesman for the state Department of Family and Protective Services, said in an email that the agency is aware of the video and “will take the appropriate steps in this matter.” He said the agency would have no further comment.

Steve Fischer, a longtime attorney in Rockport, called Adams fair and a “better than average” judge. He said Adams sometimes showed anger, but not in a way that would be considered unusual.

Hillary, whose parents divorced in 2007 after 22 years of marriage, said she waited this long to post the video because she didn’t know what would have happened to her had she posted it just after it happened.

“If this had blown up when I was a minor who knows where I would be. I wouldn’t be able to escape.”

While Hillary is close with her mother, she suspects the video will only further alienate her from her father’s side of the family. Still, she says she believes it was the right thing to do.

“I’m very relieved that these things have been brought to light and not because I want to see my father burn or anything like that. That’s a hideous way of thinking and I don’t want to inflict that upon him,” she said. “I cannot stress enough — I cannot repeat myself enough, that he just needs help.”