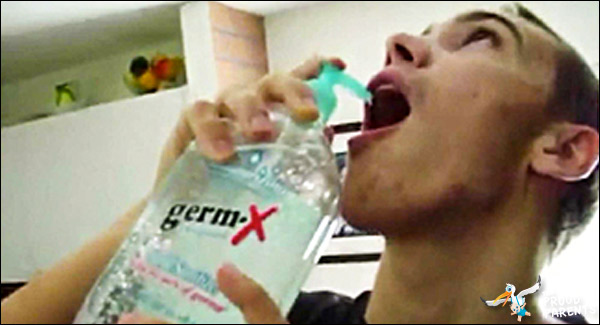 Vodka in the eyes. Tampons soaked in alcohol and shoved in the anus. Teens getting drunk off hand sanitizer.

He said he’s seen too many young people come through the hospital’s doors because they tried to get drunk by guzzling hand sanitizer.

It doesn’t sound appealing, but you have to remember that kids don’t have access to alcohol so they’re very creative,” Mallon told KTLA.

The trend may seem harmless or even laughable, but doctors say it’s harmful and dangerous.

Bottles of hand sanitizers are inexpensive and accessible and teens can find instructions on distillation online.

“All it takes is just a few swallows and you have a drunk teenager.”

“It is kind of scary that they go to that extent to get a shot of essentially hard liquor,” Rangan said.

Although there have been only a few cases, Rangan said the practice could easily become a larger problem.

At least six teens from the San Fernando Valley have ended up in local emergency rooms in recent weeks.

In addition to the teens who intentionally drank the sanitizer, younger children also have accidentally ingested it in the past.

A few drinks can cause a person’s speech to slur and stomach to burn, and make them so drunk that they have to be monitored in the emergency room.

Doctors said this is the latest over-the-counter product teens have adapted for a quick high.

Teens have done the same with mouthwash, cough syrup and even vanilla extract.

“Over the years, they have ingested all sorts of things,” said Helen Arbogast, injury prevention coordinator in the trauma program at Children’s Hospital Los Angeles.

“Cough syrup had reached a very sexy point where young people were using it…. We want to be sure this doesn’t take on the same trend.”

The recent cases involving hand sanitizers have surprised doctors. There were no such cases last year.

They have also raised concerns about the lack of awareness among parents of the risks linked to the popular hygiene product.

If parents buy hand sanitizer, they should purchase the foam version rather than the gel type because it is harder to extract the alcohol and teens may be less likely to drink it.

Parents also shouldn’t leave hand sanitizer around the house, and should monitor it like any other liquor or medication.