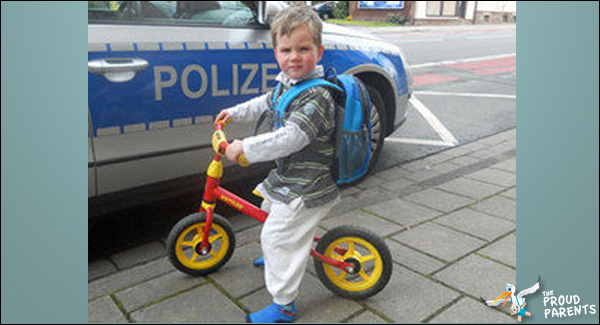 When 2 year old Noah decided he wanted to go visit his sick grandmother in the hospital, the only thing stopping him was the fact that his bike didn’t have a GPS.. or at least that’s what he told Police when he was stopped 3 miles away after several reports of a lost toddler wearing no shoes biking back and forth across the street. Read the entire adorable story, after the jump!

A DETERMINED toddler gave his mum the slip to cycle half way across town to visit his sick gran in hospital.

Two-year-old Noah Joel packed his favourite sweets in his rucksack and pedalled his toy bike across Hameln, Germany, while his mother thought he was playing in his room.

He was only stopped after more than three miles on the road when police received reports of a lost child criss-crossing the same road several times – wearing just socks.

A police spokesman said: “He didn’t really know the way to the hospital. But he blamed that on his bike for not being fitted with sat nav.”

Young Noah was returned to his horrified mum who had frantically called police after spotting that both he and his bike were gone.

“He is a very determined, confident little boy. He was worried about his grandmother and wanted to do something about it,” explained a family friend.