25 Year Old Mom Arrest For Giving Her Son This Haircut 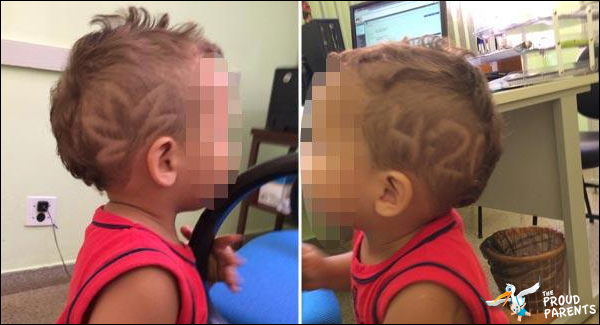 The original story is in Portuguese, but we have the google translated version below.

A 25 year old woman was arrested in the town of Santa Maria do Suaçuí (MG), after ordering a hairdresser to design symbols advocating for marijuana in the hair of his son, 1 year and 5 months.

According to the officer in charge, Teotônio Marcelo Castro, Vanya Aparecida da Silva was taken to the police station on Monday after the military police boarded and were surprised drawings made on the child’s hair, which had the left one marijuana leaf and the right symbol 4:20, regarded as a code identifying drug users.

Because of the time, Vanya was ordered to return to the police station on the morning of Tuesday, when it was assessed in flagrant corruption of minors and crime apology. “She did not touch the hair of the child between the second and third. When I saw what it was in the autuei blatant, “said the delegate.

According to the delegate, Vanya said he did not know that the drawings were condoning marijuana. “She said she saw the pictures on the internet, he found beautiful and therefore decided to make the hair of the child,” Castro said. After the arrest of Vanya, the boy was sent to the Guardian Council of the city. As the child’s father died, she was sent to their families.

The responsibility for the hair cut, Leonardo Rodrigues dos Santos, 26, testified on Thursday and said he did not know that the drawings referred to the drug. “He said he did not want to do the drawing, but she ( Vanya ) threatened not to pay the court if he did not, and he then cut off, “said the delegate. Despite the claim, Leonardo should be indicted as a co-author in the crimes, according to the sheriff.