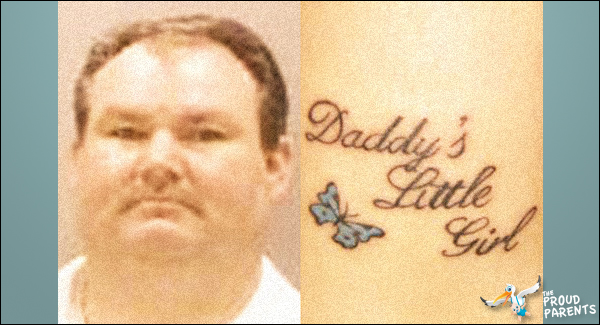 Pictured above is Victor Shane Scroggins, the 39 year old father who thought it would be a good idea to tattoo his 14 year old daughter in their home. Although the photo shows a representation of what the tattoo is, it’s not even close to the real thing – this man tattooed “Daddy’s Girl” on his daughter, as well as the logo of the rifle manufacturer “Browning”. Full story below..

Deputies arrested 39-year-old Victor Shane Scroggins Thursday morning. He is charged with tattoo of a minor, unlawful neglect of a child and not having a required certificate. After turning himself in Thursday morning, Scroggins was taken to the Alvin S. Glenn Detention Center.

Scroggins is accused of tattooing “Daddy’s Girl” and a Browning logo in his 14-year-old daughter’s wrist at their home in October.

Deputies received tips that Scroggins tattooed his daughter and possibly others in his home, without a license from the Department of Health and Environmental Control. Investigators are looking for anyone who may have received a tattoo from Scroggins. Anyone who has should contact the Richland County Sheriff’s Department.

Sheriff Leon Lott says “You should never take getting a tattoo lightly. Know the risks. Tattoos breach the skin which means infections and other complications are possible.”