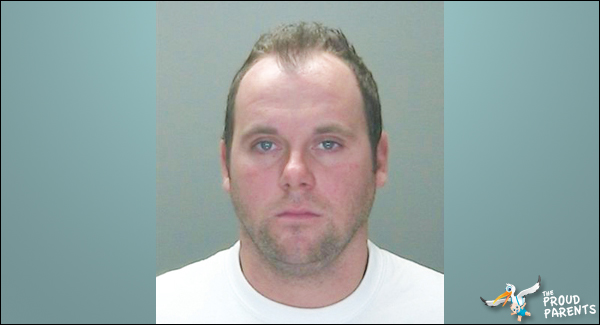 This is Clint Richard Vanepps, the Proud Father that decided gambling was more important than his one year old son Caden, and headed in to a local casino, leaving the young fella unattended in a vehicle for upwards of 45 minutes in -9 degree weather(-15 with the wind chill). Within 10 minutes of the Ontario Casino staff being notified about the child they had broken in to the vehicle and were having Caden checked out by EMS. Casino staff have since barred Vanepps from the premise for 5 years. Keep reading for the full story and the list of excuses Vanepps came up with..

Farmington, N.Y. — “I guess I lost track of time” is one explanation that Clint Richard Vanepps allegedly gave to an Ontario County Sheriff’s Deputy when he was arrested Monday afternoon. Vanepps is accused of leaving his seven-month old son Caden in his pickup truck for almost an hour while he was inside the Finger Lakes Gaming Casino. Vanepps is charged with Endangering the Welfare of a Child, a misdemeanor that carries a maximum sentence of one year in jail.

Court documents include a statement from various witnesses including a woman who first reported the child being in Vanepps’ truck, a security officer for the casino, and from the arresting deputy.

Also included in the documents are six possible explanations that Vanepps reportedly told the arresting officer.

“I just came in to look for my ID and credit card.”
“I know they don’t let kids in.”
“I was only in here about fifteen to twenty minutes.”
“I started it with the car starter.”
“I guess I lost track of time.”
“I put in five dollars for a scratch off.”

Ontario County Sheriff’s Deputies claim the outdoor temperature at the time they found the child was 15 degrees Fahrenheit with a wind chill of 5 degrees. They further claim that Vanepps’ vehicle was not running and that the child had a light cloth covering its car seat in “what appeared to be an attempt to hide the baby from view of others.”

Ontario County District Attorney Michael Tantillo tells 13WHAM News that he is still reviewing the case and is considering whether any felony charges could be applied. He said evidence he’s reviewed indicates that the baby was left unattended in the vehicle for more than 45 minutes.

While Vanepps is considered innocent until proven guilty when it comes to the criminal matter, Finger Lakes Gaming Casino does not abide by the same burden of proof and has already taken action against Vanepps. Steve Martin, the Senior Director of Marketing and Gaming tells 13WHAM News that Vanepps is banned from the casino for the next five years.

“Fortunately we’ve never had a situation like this in the seven years since we’ve had the Casino open,” Martin said. “Hopefully we never see that type of a situation again.”

Martin explained as how on-duty security and E.M.T.’s were quick to respond to the vehicle and upon feeling the car’s hood to verify it was cold, they made the decision to break into the vehicle. The baby was inside and being treated by medics within ten minutes of the time security was first notified according to Martin. At that time the boy’s father, Clint Vanepps, had also been located inside the casino after numerous loud speaker calls.

When contacted by phone Vanepps’ lawyer, Stephen Sercu, said he had no comment at this time as he was still reviewing the case. Vanepps is scheduled to appear in Farmington Town Court on Monday.