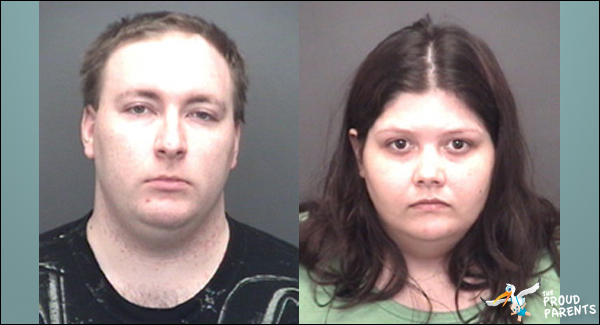 The mug shots above belong to Bryan and Martina Shivers, the Evansville couple that figured taping their children to chairs for 10 hours straight was a proper form of discipline. If only it ended there – this Proud Couple also admitted to taping them to chairs for 5 hours the previous day before they were busted, as well as regularly beating the children hard enough to leave marks. Reading the article, it seems almost as though they’re bragging about their actions. Keep going for the infuriating news story..

EVANSVILLE – Two Evansville parents are in jail this weekend for allegedly beating and taping two young children to chairs.

It’s a case that has even veteran officers astonished. Lt. Monty Guenin from the Evansville Police Department says, “You wonder how anyone could do such a thing to children.”

Brian and Martina Shiver are in the Vanderburgh County Jail facing several charges including criminal confinement and child neglect.

According to an Evansville Police Department spokesman, an officer overheard Brian Shiver yelling at a child around 6:30 p.m. Friday from the hallway outside the Shiver’s Woodland Park apartment. The officer claimed he heard Brian threaten to hit a child and ask his wife, “did you take the tape off their mouths when you fed them.”

The officer then called for another officer and the two knocked on the door. After explaining they were there to check on the welfare of the children, officers said Brian let them in the apartment. Inside, officers allegedly found two children, ages 2 and 4, taped to chairs from their shoulders to their waists. They said in the affidavit it was difficult to cut the children free because the tape was tightly pressed on them.

“The children had been bound for at least 9 hours that day,” Guenin tells News 25.

After officers made entry in to the apartment, they realized something else was wrong. Guenin says, “These children went to the bathroom in the diapers and they had not been changed.”

While questioning the parents, officers got even more information that concerned them.

The children were taken by Child Protective Services, and EPD said they were placed in foster care.

The parents face two felony counts each of criminal confinement, neglect of a dependent, battery and criminal recklessness.

Guenin says, “The most difficult thing is, if you have kids yourself and see this situation and how these children have been treated and it just really tears at you.”