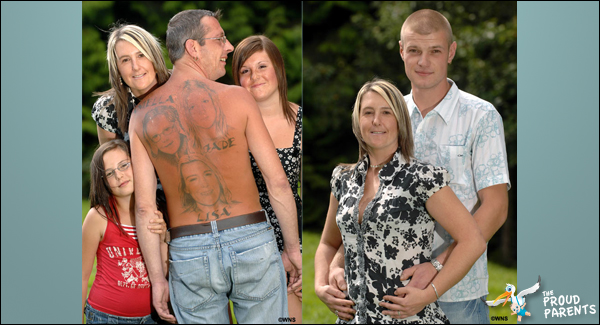 Remember that awesome dad we posted that got the back piece of his wife and kids? Well turns out his wife sucks. After shelling out £870 on the tattoo paying tribute to the family he loved so much, his wife left him for a 25 year old work pal. Find the full story after the jump!

After 15 happy years with his wife, Alan Jenkins decided it was time for the ultimate expression of love.

So, determined to prove his devotion, he had a lifesize image of her face – along with those of their two daughters – tattooed on his back.

Unfortunately for the besotted Alan, it also backfired on a monumental scale after Lisa, 36, absconded with a 25-year-old Latvian hunk she had met at work.

Speaking last night, the jilted steelworker, said: “It’s a real sickener. I thought she was happy.

“I had it because I thought we loved each other – I feel very betrayed.”

Lisa met her new love, fitness instructor Kaspars Gavars, at work and now intends to move him into the family home in Port Talbot, South Wales, – once Alan has moved out.

“I didn’t plan to fall in love with Kaspars – it just happened,” she said.

“And I never wanted Alan to have my face tattooed on his back in the first place.”

Alan, who has two girls Daniella, ten and Jade, 15, only grew suspicious after Kaspars started giving Lisa lifts to work.

He could be forgiven for wanting his wife off his back for good, but despite his heartache, he has no plans to have to tattoo removed.

“Lisa may have left me but she’ll be on my back forever thanks to the tattoo,” he said.

“But I’ve still got plenty of room on my chest if I get hooked up again.