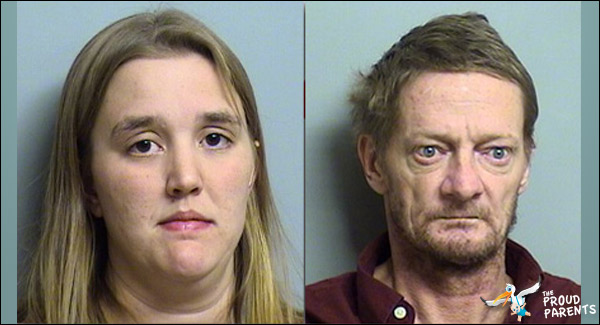 TULSA, Oklahoma – Prosecutors filed charges Friday against two Tulsa parents after police found one naked child locked outside their house in the cold and another locked in a dog crate inside the house.
It happened in their home at 4965 North Frankfort Place, last Monday.

Police said the father of the three children, William Todd Lewallen, 48, was home, and passed out in the bedroom, when they responded to a call from a neighbor.

Court documents say William Lewallen was negligent by taking drugs and drinking while the children were in his care, and the mother, Erin Elizabeth Lewallen, 27, was negligent by leaving the three children with their father, knowing they may risk harm, due to his history of substance abuse and the medications he was currently taking.

The neighbor said they found a naked 3-year-old boy screaming and crying in the backyard of the Lewallen home. When police came, they heard another child screaming inside the house and found a 22-month-old girl, locked inside a dog crate. They found another naked 3-year-old asleep in a bed in the master bedroom, next to William Lewallen.

Police said they found the house filthy, with a pork chop lying in the living room floor and dirty diapers lying all over the house.

According to the affidavit, William Lewallen told police he had a broken back and needed surgery. He said he had left the hospital on November 10, against medical advice, so he could watch the kids while Erin was at work, at Walmart. He said he had taken four Oxycontin throughout the day, a Dilaudid, and a Flexeril, a muscle relaxant. He told police he also drank a 16 oz. can of beer, and then “laid down to take a rest.”

The affidavit states Erin Lewallen told an officer that “he told me wasn’t going to drink today,” referring to William.

Court documents show they were both charged with one count each of felony child neglect.

According to Tulsa County court records, William Lewallen has been convicted in the past of joyriding and possession of a precursor to manufacture a controlled drug – methamphetamine.

The three children are now in Department of Human Services custody.

William Lewallen is being held without bond, but according to jail records, he’s currently in a Tulsa area hospital.

Erin Lewallen was taken into police custody Friday evening. She had been arrested and released Tuesday on a larceny charge, according to jail records.