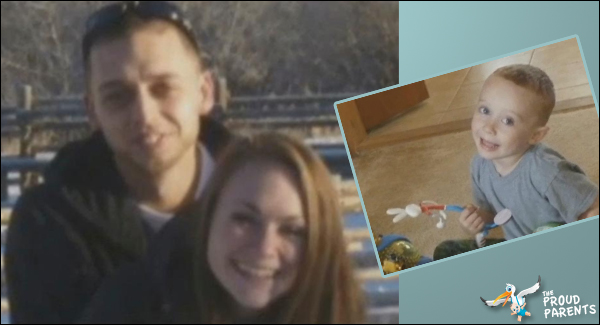 Jessica Linscott and Roland Dow, pictured above, are wanted by police after dropping Linscott’s 3 year old son off at the hospital with multiple injuries they claimed were self-induced. James, the three year old, is now recovering in hospital from brain surgery while the police hunt for his mother and her boyfriend who were supposed to turn themselves in to the station on November 19, but didn’t show.

Cops are hunting for a New Hampshire mother accused of dropping off her 3-year-old at a local hospital with severe burns, bruises and a head injury that left him temporarily blind.

Jessica Linscott has been on the run with her boyfriend, Roland Dow, since she brought her toddler, James, to Exeter Hospital in Exeter, N.H., on Nov. 14, WMTW reported.

The pair were expected to turn themselves into authorities Monday. When they failed to show up, police searched their Plaistow apartment and found no clues regarding their whereabouts.

They are believed to be driving in a car owned by a relative and may have even fled to Maine.

She now faces six counts of child endangerment, while her boyfriend, 27, has been slapped with two first-degree assault charges.

The 3-year-old is currently recovering from brain surgery at the hospital, with his grandmother, Helen Nicholson, at his side.

His body is covered in bruises and second- and third-degree burns.

Nicholson said she warned Linscott that the boy was not safe in the hands of Dow, who is not his father.

Jonathan’s father, Paul Nicholson, said he had no idea his grandson was being abused.

“James was at my ex-wife’s house last week, and when his mother came to pick him up, he hid. He was saying, ‘I don’t want to go,’” Paul told the Boston Herald.

“It was kind of weird, but we didn’t check him out or take off his clothes and look at his body. Now I wish we did.”

Paul said that James is slowly but surely regaining strength.

“His eyesight has come back almost 100 percent, and he’ll get out of the hospital soon,” he added.