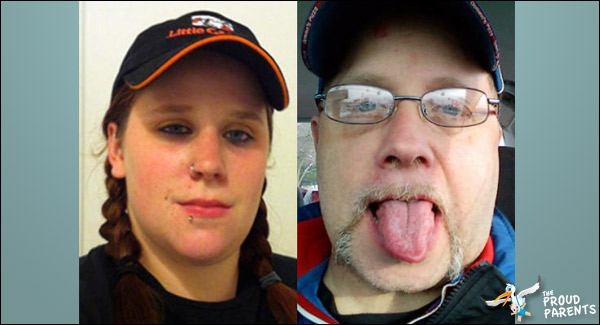 (CBS/WFSB) BETHEL, Conn. – A 46-year-old Connecticut man and his 23-year-old daughter were both arrested Monday for incest after police said DNA tests proved they had a child together. They were each charged with third-degree sexual assault.

According to CBS affiliate WFSB, police said they discovered the relationship between George Sayers Jr. and Tiffany Hartford while investigating a complaint about the family distributing pornography.

Authorities told WFSB that they launched an investigation in February after Hartford’s ex-girlfriend told police the family was selling pornographic photos and videos of her taken while she was underage. The videos reportedly show Hartford and the unidentified woman engaging in sexual acts when the women were as young as 16. The second woman said she consented to the photos and videos being taken, but not to their distribution.

Although Hartford reportedly denied to police knowing that Sayers was her father, Hartford’s ex-girlfriend claims the now 23-year-old introduced him as her “husband/father.” Hartford said when she was born, her own mother was having sex with both Sayers and with another man named Lee Hartford, who she believed was her father, although she admitted she didn’t know for sure.

Sayers and Hartford live together in a home with eight other family members, WFSB reports.

In Connecticut, incest is treated as sexual assault. Both the child and the parent can be charged if they knowingly engage in sexual intercourse with each other.