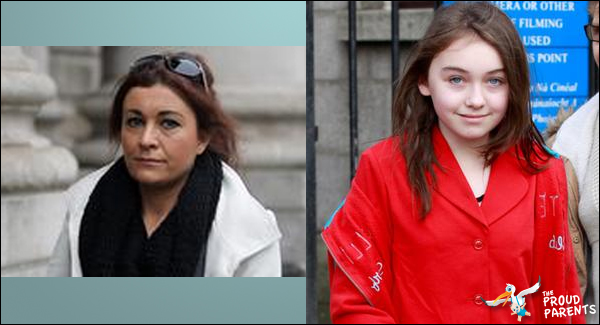 Pictured left is Mary Carberry, 36, the mother of Faith Carberry, pictured right. Faith has decided to sue her mother (and father), through her grand-father, for Mary’s decision to drive drunk back in 2007. A decision that ultimately cost the lives of two young people, Faith’s 6 year old sister Ava, and Faith’s 9 year old friend Michaela Logan. The other occupants of the car; Mary, Faith and Michaela’s brother John survived, with injuries. Spinal injuries to Faith kept her in a cast for 10 weeks, as well as 3 months therapy dealing with the loss of her sister and friend. Mary, driving on a suspended license for two previous DUI charges, was driving a BMW Faith’s father had bought for Mary. He claims he expected someone else, who was licensed and insured, would be driving the family around.

After almost losing her life to her parents’ poor judgment, a little girl has taken her family to task—and to court.

12-year-old Faith Carberry, of Longford, Ireland, filed a lawsuit against her parents, Mary Carberry and Tommy Varden, after sustaining severe injuries from a drunk driving accident caused by Carberry, driving a car purchased by Varden. On Wednesday, the liability suit was settled on undisclosed terms.

The accident occurred in November, 2007, when Faith was seven years old. Carberry was binge drinking and crashed her BMW into an embankment, killing Faith’s sister Ava, 6, and Faith’s’ friend, Michaela Logan, 9. Michaela’s brother John was also injured but, like Faith, survived the crash.

Carberry allegedly has a history of chronic alcoholism, and at the time of the accident had been banned from driving after two DUIs.

Faith survived, but suffered serious spinal injuries which left her in a cast for 10 weeks. She later spent three months in therapy over the death of her sister.

Five years later, she filed a lawsuit through her grandfather, Anthony Carberry, against both her mother and her father, Tommy Varden, for physical and psychological damage.

The little girl’s troubled childhood was highlighted in court testimony five years ago, during her mother’s trial after the accident.

According to Mary’s account, published in the Irish Independent, her evening of drinking involved a pub crawl that was broken up only by a trip to pick kids up from school. With four children in the backseat, Mary claims she had “blacked out” when the car plunged into an embankment.

“All I remember is the thump. Then the flashing blue lights,” she recounted to the judge. “I did not know what I hit. I remember Ava, I remember her face, I just don’t know what happened. I don’t remember arriving in the hospital.”

If her mother was ill-suited as a guardian, Faith’s lawsuit doesn’t seem to excuse her father either.

But Varden, a wealthy businessman in his 70’s, claims that he was only trying to help as best he could. He had been estranged from Mary Carberry after a long relationship. She had full custody of their children at the time, but he claims to have repeatedly called social services when Mary’s drug and alcohol problems seemed to pose a threat. He also claimed to have provided financial support to his kids. And, when Carberry lost her license after two drunk driving incidents, he bought her the BMW involved in the accident so the kids wouldn’t have to walk a mile and a half to school, he said. Still, he told the court, he expected someone else to get behind the wheel.

“It pulled at my heartstrings,” Varden told the court, according to the Irish Examiner. “She was seeking for me to provide transport, purchase a car, and somebody who was insured and had a full license would drive it.”

Faith is not alone in being a childhood victim of drunk driving. In the US, more than two thirds of children fatally injured in car accidents were riding with drunk drivers, according to a report by the Center of Disease Control and Prevention. And young kids don’t have the ability to opt out of a ride if it’s a parent behind the wheel.

Back in March, a mom in Iowa was allegedly so impaired on the road, her 15-year-old daughter called 911 from the passenger’s seat. In 2009, four young kids died in a crash on the Taconic highway after their driver, a parent and guardian, was found to have a blood alcohol level of .19 percent.

The organization Mothers Against Drunk Driving claims to have received “an increasing number of alarming calls from concerned individuals regarding children riding with impaired drivers.” It blames a “general lack of awareness” for the growing problem, and believes stiffer penalties need to be placed on the impaired driver when children are involved.

Mary Carberry was given to six years in prison after the accident, with two years suspended from the sentence. But her daughter’s lawsuit suggests that forgiveness will come at a greater cost, if it comes at all.