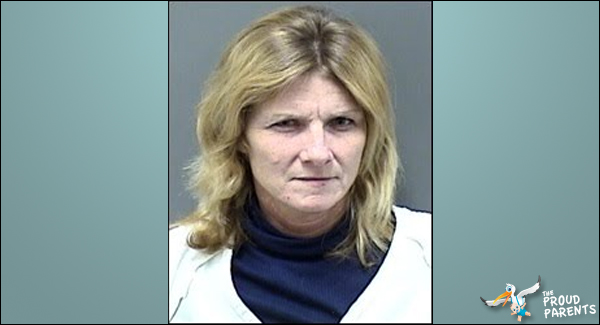 Here’s one for the books.. Patricia L. Strosina, pictured above, is accused of causing her sons overdose. How? Well Patricia was the one feeding her son the drugs that eventually led to his death. Unlike one parent we featured previously, Patricia didn’t actually feed her son drugs, she just shot them in to his arm and smoked them with him. It’s said at 14 her son, Raymond, began smoking marijuana. By 15 his mother was giving him heroin to snort and at 16, he is dead. Keep reading for the full news story..

RACINE – A woman allegedly taught her teenage son how to use the heroin that led to his death.

Patricia L. Strosina, 46, 35420 Miller Road, Town of Waterford, is charged with intentionally contributing to the delinquency of a child causing death. If convicted, she could face up to 25 years imprisonment, which includes time in jail or prison and on probation or extended supervision.

Strosina’s 16-year-old son, Raymond, was found dead on Sept. 14. Raymond’s father had gone to wake his son up for school at about 6:30 a.m., but found him sitting on a stool in the computer room, with his head on the desk and his hands hanging toward the floor, according to the criminal complaint. The father found a syringe with an orange cap on the floor and told law enforcement he believed Raymond may have overdosed.

An autopsy showed Raymond stopped breathing after overdosing on heroin and cocaine.

When Racine County Sheriff’s Department investigators began to look into Raymond’s drug use, people pointed to his mother.

One woman said she saw Patricia Strosina buying heroin for herself and her son, and that no one could believe it was happening, because “Raymond was just a kid.” The woman said she overheard Patricia say she would “not cut Ray off because he would get sick.” People told investigators that Raymond started smoking marijuana when he was 14, and that by the time he was 15, his mother was giving him heroin to snort.

On Oct. 13, an investigator brought Patricia Strosina in for questioning. She reportedly admitted using heroin and OxyContin, the criminal complaint states, and after initially denying her son saw her drug use, later admitted giving him heroin. She also reportedly said she never took Raymond for any treatment.

Strosina was given a $15,000 cash bond Monday by court commissioner Alice Rudebusch. She was also ordered not to use any controlled substances. Her preliminary hearing was set for Oct. 29.

District Attorney Mike Nieskes said the Sheriff’s Department continues to investigate where Raymond got the drugs he used the night he died. Nieskes said there is the “potential for other charges to be filed, but that depends on what the investigation turns up from this point forward.”

Strosina isn’t the first Racine County mother charged with contributing to her child’s drug use.

In 2004, Carol A. Smith of Waterford admitted using and dealing heroin, and her daughter said she also used the drugs, sold it at school and sometimes picked it up for her mother from a dealer in Milwaukee. Smith is still in prison, on this and other charges, with a release date of March 10, 2012.