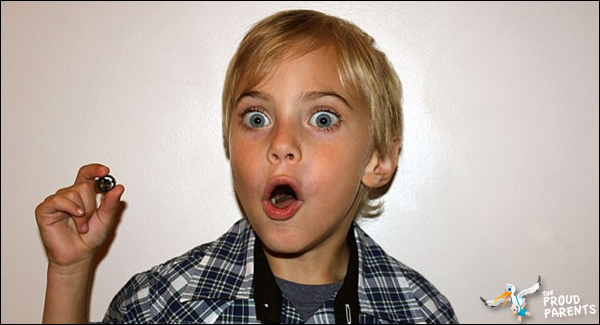 For three years the parents of Isaak Lasson, pictured aboved, were baffled by his constant sinus congestion and sometimes troubled breathing. Doctors blamed allergies and sinus infections as the cause of the congestion, but it wasn’t until Isaak shoved some spaghetti up there and it began to stink that a specialist was called in and a tiny rubber wheel was pulled out. Continue reading for the full news story..

Isaak Lasson’s constant congestion was baffling his parents. For three years, the 6-year-old from Salt Lake City snored like a man and sometimes struggled to breathe.

“It broke my heart,” said Isaak’s dad, Craig Lasson, describing his sleeping son’s gaping mouth. “Doctors kept telling us it was allergies or a sinus infection, but nothing seemed to help.”

The situation stunk. And over time, so did Isaak’s nose.

“We noticed a weird smell when he breathed,” said Craig Lasson. “We took him to a new doctor, and he said, ‘I think there’s something in there.'”

Isaak admitted he’d “put some spaghetti in there that hadn’t come out,” his dad said.

But there was only one way to find out.

“It sort of stretched, then all of a sudden it popped out,” said Meier of Utah Health Care in Salt Lake City, describing the squishy rubber wheel coated in a thick layer of fungus.

“We have no idea what it is or where it came from,” said Craig Lasson, adding that the dime-size wheel could be a piece of Lego or part of an ear bud headphone. “We were trying to figure out how something that big even got inside of a tiny 3-year-old’s nostril. It is pretty flexible, so we think he bent it in half and pushed it up his nose.”

Wherever the wheel came from, it now sits in a container atop the family’s fridge.

Beyond having a great story, Lasson sleeps better and has more energy, according to his dad. His appetite has also improved, since he can finally smell his mom’s cooking.

“As parents we felt guilty at first for not finding it sooner, but we had no idea that anything like that could have been in there,” Craig Lasson said. “But everyone’s been so supportive. It sounds like a lot of parents have similar stories.”

“Often they won’t remember putting them in there, or won’t admit it,” he said.

And while some doctors hold onto their freaky finds, Meier prefers to return them to their rightful owners.

“Maybe it will help them remember not to do it again,” he said.