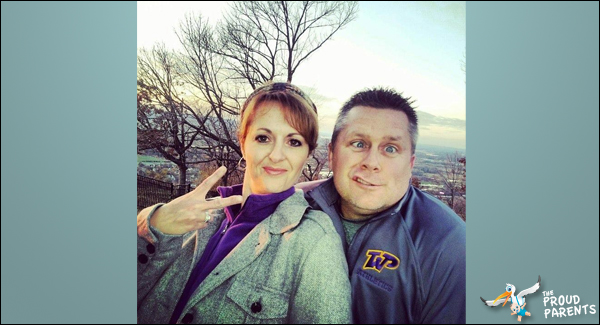 Making it’s rounds on the internet are the Wisconsin couple pictured above – why such an awkward photo? Well that’s exactly why they’ve gone viral. The two are making headlines around the world for using their daughter’s cell phone to snap embarrassing photos of themselves and posting them on her Facebook page for all of her friends to read. Some say it’s horrible, some say it’s great parenting.. we want to hear your opinion! Make the jump for the full story and vote in the poll below..

The rise of social media has changed work, play — and many aspects of parenting. For some moms and dads, it has even provided new ways to discipline. In the latest edition of “I’m getting back at my child on Facebook,” one couple has taken to the social network to embarrass their daughter in a highly creative way.

Instead of a traditional punishment, the mom and dad of two used their daughter’s cellphone to post silly (read: mortifying) pictures of themselves on her Facebook wall. The girl’s brother, Reddit user AustinMac posted one of the photos (see below) over the weekend with the caption: “My parents took away my sisters phone for the week. They’ve uploaded about 10 of these to her facebook. Doing it right!”

His sister’s offense? “She got fresh,” AustinMac told a fellow Redditor.

Reactions to the parents’ public punishment are varied — The Daily What calls mom and dad “kickass” while some Redditors expressed sympathy for their daughter.

“I also remember being a teenager though. Something like this would have been about the most horrifying experience of my life. I feel for the sister,” rohinton wrote.

As public online punishments continue to make news, many debate whether virtual discipline is acceptable and effective or does more harm than good. When Tommy Jordan shot his daughter’s laptop because she posted rude remarks about her parents online, video of his performance not only went viral, but he received feedback that ranged from harsh criticism and glowing praise for his actions.

And when Denise Abbott, posted the status, “I do not know how to keep my [mouth shut]. I am no longer allowed on Facebook or my phone. Please ask why,” on her 13-year-old’s Facebook wall, she received mixed reviews as well. Chicago Now blogger “kirby” wrote, “Facebook is a social media site for people to interact. NOT a place where you can humiliate your child.”

Alfie Kohn, author of, “Unconditional Parenting: Moving from Rewards and Punishments to Love and Reason” says that humiliating kids in public is counterproductive. “‘Doing to’ strategies — as opposed to those that might be described as ‘working with’ — can never achieve any result beyond temporary compliance, and it does so at a disturbing cost,” Kohn told HuffPost columnist Lisa Belkin in an interview.

In this case, commenters seem to mostly agree that posting embarrassing photos like the one below is playful, not destructive.