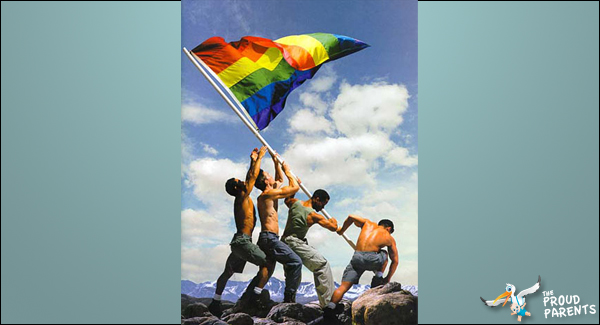 Amelia, a blogger for the Huffington Post, recently wrote a piece about how her 7 year old son had announced he was gay. A truly inspiring story, that shows we’re growing in to a world of acceptance. Continue reading for the full piece by Amelia..

“Considering that my son has a longstanding crush on Glee’s Blaine and regularly refers to him as “my boyfriend,” I thought there was a fair chance that he would someday say, “I’m gay.” But my kid is only 7 years old. I figured I had a few years before we crossed that threshold (if we ever did), probably when he was 14 or 15. I never thought it would happen this soon.

Six months ago “gay” wasn’t even a word in my son’s vocabulary. He has always known that some of our male friends are married to men and some of our female friends to women, and it is such a normal part of his life that he never needed a special word to describe them. When he did notice the word and asked what it meant, I told him that when boys want to marry boys and girls want to marry girls, we call that “gay.” He didn’t seem very interested and quickly went off to do something else more exciting than a vocabulary lesson with his mom.

Fast-forward a few months. I was on the phone with a relative who had just discovered that I was blogging on The Huffington Post and openly discussing my son’s crush on Blaine. I was in another room alone (I thought), explaining, “We’re not saying he’s straight, and we’re not saying he’s gay. We’re saying we love who he is,” when my son’s voice piped up behind me.

My world paused for a moment, and I saw the “geez, Mom, didn’t you know that already?” look on my son’s face.

I got off the phone and leaned down to eye level with him and rubbed my nose against his. “I love you so much.”

“I know,” he said, and ran off to play with his brothers.

Since that day, any time the word “gay” has come into conversation, he has happily announced to those around him, “I’m gay!” He says this very naturally and happily, the same way he announces other things that he likes about himself. Mention that a person is tall and he’ll quickly add, “I’m tall!” If he hears the word “Legos,” barely a second passes before he says, “Legos. I love Legos.” Saying “I’m gay” is his way of telling people: this is something I like about myself.

It’s amazing, but it’s also shocking. How many people have a 7-year-old come out to them? A lot of people don’t know how to react, and I don’t blame them. Before my son, I’d never met a child who came out this young — and we don’t know anyone else who has. The mere idea of children having a sexual orientation makes people uncomfortable. It’s something we don’t think about (or just don’t like to).

But here’s the thing: straight children have nothing to announce. Straight is the assumption. No one bats an eye at a little girl with a Justin Bieber poster in her bedroom, or when little girls love playing wedding with little boys every chance they get. If our sexual orientation is simply part of who we are, why wouldn’t it be there in our elementary years?

I’ve heard from countless adults who say they knew that they were gay as young as kindergarten but lacked the language to talk about it. And in most cases, they knew it was something wrong that they should hide. Because gay people are part of my son’s everyday life, he has the vocabulary, and it has never occurred to him there is anything wrong with it.

On one occasion after an “I’m gay” announcement, I watched my husband reach out to ruffle our son’s hair. “I know, buddy,” my husband said to him. “And you’re awesome, too.” That’s how we’re handling it. We want him to know we hear him, and that he’s wonderful. It feels like the right thing to do, and that’s all we have to go by. We don’t have any other examples.

We did take a few extra steps. Within a few days we had a quick talk with him about how some people don’t like it when people are gay, explaining that those people are wrong. If he hears anyone says anything about being gay like it is something bad, he is to run and get us immediately. We had a brief conversation with his teachers: Our son is identifying as gay. We don’t think there’s anything wrong with that or with him. And this is the only acceptable opinion on the subject. All his teachers, while surprised, were on board. We learned that he hasn’t used that word at school yet, so we’ll cross that bridge when the time comes.

I don’t think it will always be easy. We don’t know what to expect. At this point we aren’t looking for trouble, but at the same time we’re preparing for it. We know we have a journey ahead of us, just like everyone does. And this is one part of the story of our son and our family.

Do I think this is the last word on his orientation? I don’t know. He’s 7. Maybe as he gets older he’ll tell me something else, but it’s just as likely that he won’t. But really, that doesn’t even matter. What matters is right now. And right now I have a young son who happily announces “I’m gay.” And I’m so proud to be his mom.”