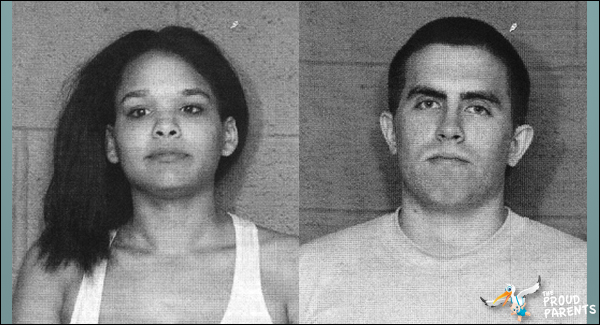 Not like anyone is going to be surprised, but two of the greasy teenagers featured on MTV’s “16 and Pregnant” have been arrested on drug charges as well as child neglect. Although police only found a gram of “synthetic marijuana”, they also found “human and animal feces were on the floors and walls in each room”, as well as maggots in some areas. Keep reading for the full story courtesy of the Associated Press..

JACKSONVILLE, Ark. (AP) — A couple featured on the first season of the MTV reality show “16 and Pregnant” have lost their child to the state and face criminal charges after officers serving a search warrant found their home was filled with feces, flies and maggots, police said Thursday.

Joshua Rendon and Ebony Jackson-Rendon, now both 19, were charged Tuesday after the search of their home at the Little Rock Air Force Base. The Arkansas Department of Human Services took custody of their 2-year-old child, who was born while the TV show was taping. Rendon is a member of the Air Force.

They face felony charges of maintaining a drug premises and unauthorized use of another’s property to facilitate a crime. They’re also charged with misdemeanor child endangerment, possession of drug paraphernalia and possession of a controlled substance.

Officers obtained the search warrant after being called in by base officials.

Boyd also said the home was in “deplorable” condition. Human and animal feces were on the floors and walls in each room, and animal control officers took away three dogs that were kept inside, Boyd said. The house was full of flies, with collections of maggots in a number of areas, he said.

Rendon said over the phone Thursday that “it’s not in our best interest” to talk about the case.

MTV confirmed they were the same teenagers who appeared on “16 and Pregnant.”

Rendon’s desire to join the Air Force was an element in the show. He and Jackson-Rendon lived in Colorado Springs, Colo., which is home to the Air Force Academy. An MTV bio calls Jackson-Rendon a “military brat,” who lived with her mother but spent most of her time with Rendon, who was her fiance at the time.

They both had planned to enlist in the Air Force, but a recruiter told them only one of them could because Jackson-Rendon was pregnant.

A court appearance for them is scheduled for Oct. 6, when they may enter a plea. Both are free on $8,000 bond, Boyd said. Neither had an attorney listed.